We all remember the first time...no I am not talking about that...I am talking about that first big card pull. I know I remember mine and I still have the card to this day. Now to most of you , this wouldn't be that big of a pull. But for me who had started collecting in 1993 but increased my obsession in 1995, this was huge.

So I was shopping at the local grocery store, yes back in the 90's you could find cards everywhere including your local grocery store, and I came upon their card rack. There was not a lot of variety but one product that I kept buying packs out of the box every time I went was 1995 Fleer Ultra football. There was just something about the design of the base cards, the inserts and I really liked the Gold Medallion parallels with the card being all gold.

I grabbed three more packs and finished up my shopping and headed out of the store. I couldn't wait to open the packs. I mean literally, I couldn't wait. Just outside the motion activated doors, I took the packs out of the grocery bag and began to open them. My first two packs contained the usual base cards, insert and Gold Medallion Cards. However, as I opened pack three something almost fell out but I pushed it back into the middle of the pack. What could it be? I couldn't wait to see what was hiding! However, like with any pack I open, if I see what I called a "special card" hidden in the middle of the pack, I always go around it and check out the rest of the cards first.

I finally looked at the rest of the pack, now was the time for the big reveal..... 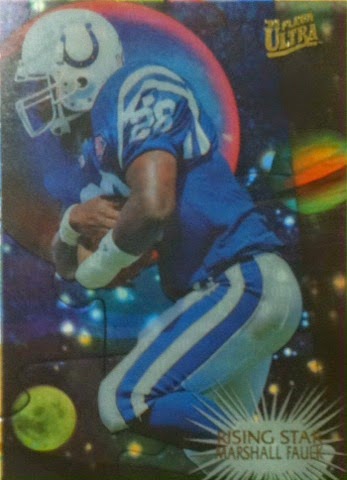 WOW! I was in shock! A Rising Stars Marshall Faulk insert card! What a pull from 1:37 pack which also means a little more than one per a box plus. There was also a rarer Gold Medallion parallels of these falling at a rate of 1:370 packs. My pull was one of the tougher ones other than its parallel.

The card itself looks amazing and the fact its printed on acetate just blew my mind. This was by far the best card in my collection. I stuck the card and the others back in the wrapper to protect them until I got home.

To this day, I still remember this pull and I still have it in my collection. This was also the only Rising Stars that I pulled from many, many packs of Fleer Ultra 95 football. There is no better feeling than beating the odds in a 90's card pack and pulling a tough insert. I will take that feeling any day over pulling a jersey card.