USA football. This product is the Bowman baseball of football cards with untapped rookies with lots of potential waiting to be shown in a few years. In the 2012 USA product alone were stars from this past seasons College Football in Jameis Winston and Todd Gurley. 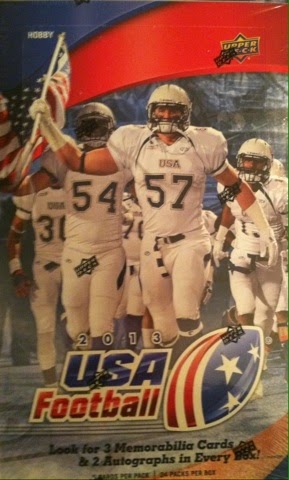 The base card designs go as follows. They seem to fit the theme here which is a must for a product like this. A new add to this years set is Football Canada which seems a bit out of place for a USA themed product. But, it helped add more depth to the base set. 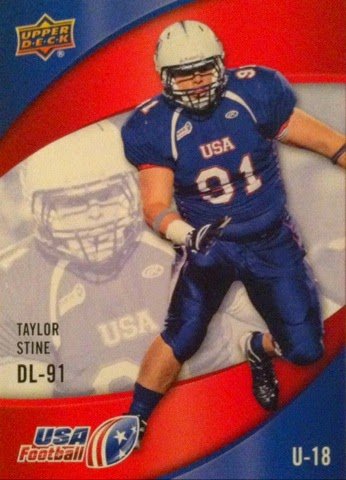 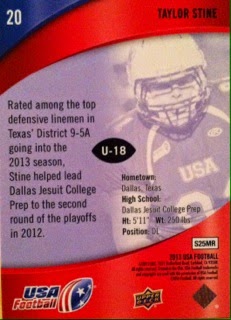 Team Canada has a yellow color to it's background as opposed to the bluish/white in the USA's. 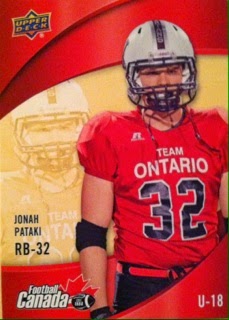 There are also player trio cards in the base set for both Canada and USA.

Now onto the hits! You should get two-three of each memorabilia and autographed. You will also get a autographed patch card numbered to 49 or less which adds even more value to the break.

Future swatches! I must mention these are all GAME WORN! 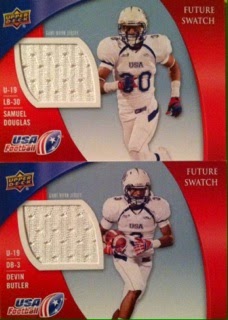 Now the autographs. I found my box to be loaded! I call a trio autograph hit to be three autograph hits. I got three sets of three so technically it's nine hits to me. Love looking at some of their signatures as well. If any of these guys become big, it will be interesting to see if they improve on their autographs down the road. 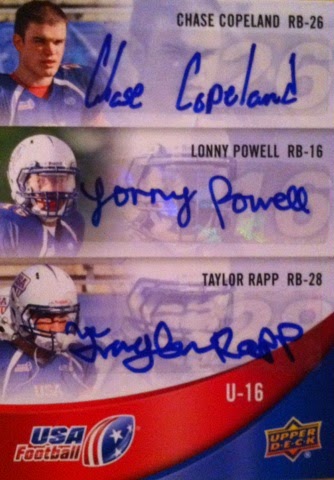 AND A LITTLE BOOM here at the end. A sweet GAME WORN PATCH Gold Parallel WITH AN R numbered 5/5. It's too bad it had to be a defensive lineman, but I will take a nice looking card like this any day no matter the position. 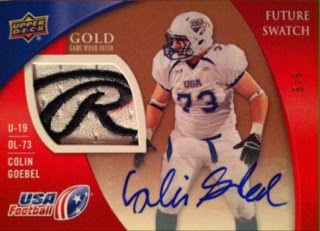 Overall, great value. I won't know how much value til I see how these guys careers go. But, just by getting the six hits for $50 alone is worth it. Especially when you get nice looking autograph and game worn jersey cards.

There are a couple of things I would tweak a little but nothing too serious. One, add some form or insert/parallel to the product so you aren't busting base cards in 18 of the 24 packs in the box. Also, if you are going to add Canada to the product, think of a better name to serve both countries in the box.
at January 07, 2015