Go Ahead, Tell Me You're Disappointed

Months ago I claimed...THIS IS THE SUMMER OF SORTING! ALL WILL CHANGE! NO MORE PUTTING CARDS BY NUMBER! PLAYER SORTING HERE I COME! Months later, I am still sorting the same way.

I just can't get out of my rut. I started with these 98-99 Topps basketball cards in attempting to sort by team, then take out the best players and keep those sorted. I couldn't do it. It was really hard to sort that way and I couldn't face the fact I could be missing out on putting a set together. Guess that's the 90's collector in me. Which by the way, I put together three sets as you can see: 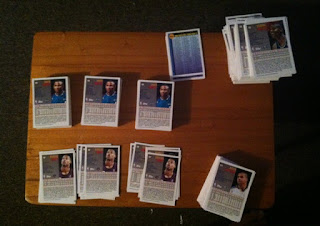 Hopefully sometime I will get myself out of my current habit and accept some change. It will be a tough habit to kick and something I may need to get some hobby counseling for lol.

So I gotta ask, how do you guys sort? Have you ever had to change a certain way you do things in the hobby and it felt like an impossible task? Let me hear it all!
at September 13, 2015