My first two weeks of the NFL have been awful. The Giants continued to blow games late this week, my NFL pick 'em looked to had been done by a 2 year old (they might have done better) and even though it appears I may get a fantasy win this week (need 11 points total between Andrew Luck and Chris Ivory) my team has a long way to go.

So to help bring some cheer to this NFL season I have had so far, I will have to take a look back. Where you may ask? Well, to the 2008 NFC Championship game between the Giants and Packers. An amazing game with a great finish. At least for Giants fans.

So the game was tied 20-20 . It honestly shouldn't have been, Lawrence Tynes had missed multiple FG's including one at the end of the game in regulation that would had won it.

But he we were. Green Bay had the ball and I was covering my eyes sweating like a pig with my jersey pretty much glued to me at that point. Brett Favre suddenly released the ball and I was thinking "oh no" but somehow and someway CB Corey Webster jumped the route intercepting it. I shouted so loud I was shocked the windows didn't break. I mean, they did this off from the LEGEND Brett Favre who had been put in winning situations many times.

Now a few downs later, it was up to Lawrence Tynes again. Could he kick the Giants to the Super Bowl or crumble under pressure.

Let's see if my newest pickups, roughly under $3 from Steiner Sports, can tell the story a bit. They are quite impressive shots. 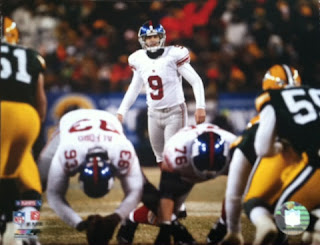 The kick is up in the air, by now I am down on one knee like the players on the sidelines.... 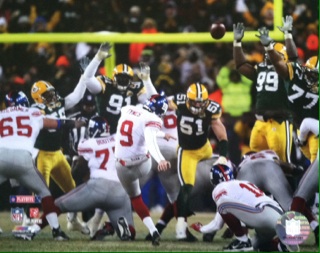 And IT'S GOOD! The Giants are going to the Super Bowl!!!!!! And if I have any Patriot fans reading this, I must remind you of how great that Super Bowl was :-D

Those were the days. Feels like forever ago and that same feeling I have is about the last time I have watched a playoff game with the Giants.

This years Giants have played well like I thought they might. The offense did pick up last week, the defense is slowly improving and now with the best players Dallas has out for awhile, the Giants with a few wins could put themselves in good position. Of course this is saying they can stay healthy too and I think Victor Cruz or another WR is really needing to step up. Odell is dominant, but if teams start to pile on him, Eli has nowhere to go.

In closing, another thing to note as well, in that same season in the above article I just wrote, they started out 0-2, gave up a ton of points/yards before playing the Redskins and turning their season around. Guess who comes to NY on Thursday night......
at September 21, 2015