Without A Paddle...But Have The Autograph!

Without A Paddle was a 2004 movie that was about three friends, Tom (Dax Shepard), Jerry (Matthew Lillard) and Dan (Seth Green) that go on a camping trip to honor the memory of their late friend Billy. The campsite they choose however, is one that their friend Billy had heard that famous airplane hijacker D.B. Cooper may had hid his money. Things may sound as easy as going to the campsite to dig or search for the money, but the three friends run into a bunch of challenges after falling over a waterfall and being left to wild animals and the tough terrain.

It was also a lot of fun to watch with three rising stars despite the not so high reviews on the movie.

I was lucky enough to own a piece of the movie recently from a Facebook contest that FYE held on a #ThrowbackThursday setup. They pretty much run a contest on their Facebook page daily so it's a must follow. 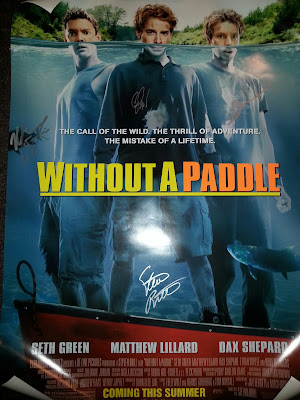 Yes, you are seeing this right. It's an autographed poster front he movie signed by the three stars and a bonus signature that I haven't quite nailed down yet that is under Seth Green's shorts.But, from my research, I believe it is from the Director Steve Brill.

This is by far one of the coolest things I own as I have followed all three actor's careers. Green, I liked as Scott in Austin Powers or as Chris on Family Guy. Lillard makes one great Shaggy in Scooby Doo and he also played one tough guy on The Bridge. Dax Shepard has a few great comedies but I totally dig Employee Of The Month.

My question to you, what's the coolest signed item or autograph from a celebrity you own?
at December 20, 2015

Email ThisBlogThis!Share to TwitterShare to FacebookShare to Pinterest
Labels: 2015, FYE, Sport Card Collectors, Without A Paddle