And I am back with another Psych Auto Project update! Two more cards down on the checklist. These were on the lower end of the buying so I didn't pay very much to land the both of these. One went for even .99 cents!

Up first is Greg Grunberg, he is best known for his role on Heroes. 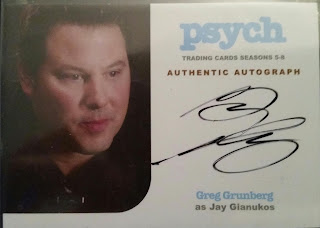 Up next is Michael Weston. I first must say this is the one I landed for .99 but it's also one I had issues with. The card arrived scotch taped between two white filler cards. I did all I could to be careful with the card and somehow in the process of prying for it's life out of the filler cards, it knicked the top causing some damage. Not major but still visible. And still recognizable for my OCD. I almost want to replace it in my set project but think I will just have to deal with it. Even though I stare at it every time I see it. I was mad that it was mailed that way. I would have rather had it in a top loader with the tape on top of that.

Now back to Michael Weston. He was best known for his role as a detective on one of my other favorite shows, House. 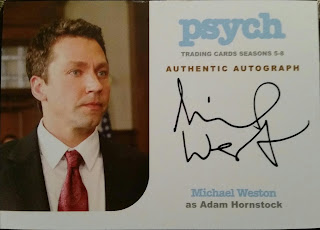 Glad to knock two more down off the list. Still a long ways to go, but knocking off the cheaper ones can only get me to my goal faster.

As a hobby topic, how many of you have shipped a card completely sealed between two filler cards without a top loader involved? You can answer yes, I won't hate you...too much ;) If you haven't, what do you think of people who do?
at January 27, 2016