Alright, so earlier this week I showed off a box of 1997 UD3 baseball I acquired in a trade with 90's Niche Football Card Blog and now comes the time for the big reveal of it.

Since this is the first pack to bust, I will show off a few extra images. Normally, how the rest will go will just be the picture of the cards per pack and a few words by me.

But, today is the kickoff so let's just show off that beautifully designed box again.... 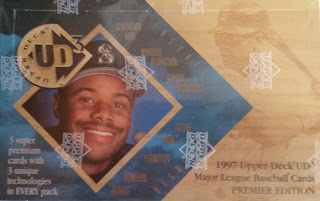 In every box of 1997 UD3 baseball, there should be 24 packs with 3 cards per pack. Each card in the pack is built unique and "super premium". Each box now-a-days will run you roughly $40 per. You should also expect at the very least a couple of inserts along with possible other surprises including autographs.
If there is an autograph or insert, that card will take up one of the other usual three cards in the pack. So you will get 2 base and one hit. Odds are tough on most pulls in the product. Generation Next is the easiest at  1:11 packs, Marquee Attraction falls at 1:144 packs and finally Superb Signatures falls 1:1500 packs. That's the only offerings other than base in the product.

When you open the box up, you find out that each pack is a mini box. 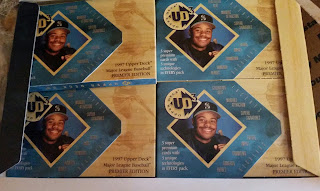 And inside of each mini box is a silver foil pack with the words, UD3 printed all over the wrapper.

Now time for the cards in the pack. Like I said, each pack comes with three unique levels of 20 cards each making it a 60 card base set.

The first one is probably my favorite design of the three, Homerun Heroes which is numbers 1-20, features a holographic foil on wood-grain stock. It looks spectacular up close. I was lucky and pulled my main man Grif in the first pack. He is card #3 in the set. 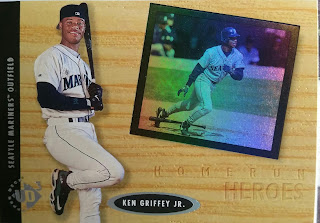 The back of the card is just as nice as the front featuring the same technology. 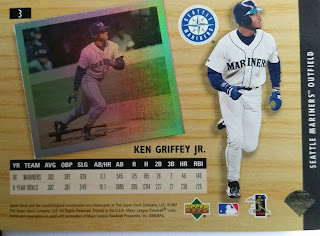 Pro-Motion which makes up cards 21-40, features a Light F/X etched-foil technology similar to the Griffey Hot List Sp's that were included in the 1997 Upper Deck flagship product. I pulled Robin Ventura as my first one. 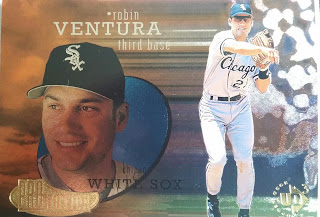 The back of the card doesn't have the foil technology. 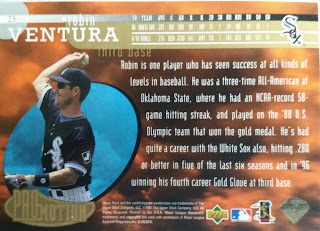 And finally, Future Impact, cards 41-60, feature a Cel Chrome (plastic/metal stock) technology. It appears that the right side of the card is nothing.... 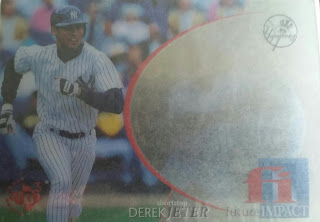 til you hold the cel up to the light revealing an image. 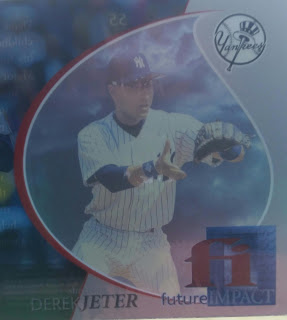 That's also the same image you will see on the back of the card except backwards. I found my other favorite player in Derek Jeter in this pack. 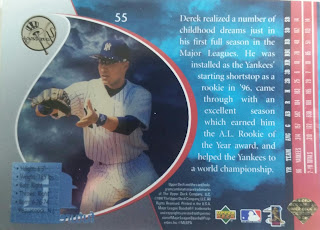 Gotta admit can't start any better than pulling Griffey and Jeter in the same pack to open up the box. I will say it also got me to missing Upper Deck baseball cards again. They simply knew how to build a cool collectible all-around product. They also built their products around the base cards. How many base cards do we see as unique as these today? None is your answer. That's why base cards are becoming less important and collectible.

Stay tuned tomorrow as I will open Pack #2 and show off the cards from the pack. I will continue to show these off til all 24 packs have been busted.
Wish me luck on trying to hopefully find an autograph and leave other thoughts on the product or cards pulled today below in comments.
at May 19, 2016