Super Bowl 25, one that most Giants fans won't ever forget. Bills fans probably won't either. It sometimes makes me think of Ace Ventura with Ray Finkle's "Laces Out" like some crazed up Scott Norwood is still thinking about "wide right".

But, it was a game for the decades and had one most spectacular renditions of the Star Spangled Banner by one of the biggest voices in music, Whitney Houston.

For years now, I have been searching for a card I thought I had. Some call it Whitney Houston's rookie card and it was a hot seller, sadly after her passing. But, I wasn't looking to sell it, I wanted to have it for my Non-Sport PC and my Giants PC.

Finally after doing my sorting project, she was found in an miscellaneous box. So here is that somewhat iconic card from 1991 Pro Set, 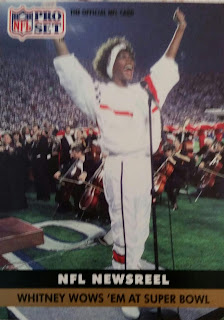 Very happy to had finally found it. I wished companies today would add in special cards and performances like this is some products. Would be another fun chase.

Thoughts on this card, Whitney and if you would like to see cards like this today are welcomed in comments below!
at February 14, 2017