One of my favorite stops as a child was the local pharmacy store. I know that this sounds weird, but I also haven't mentioned yet that they carried sports cards.

Those were the days. Remember when pretty much every where sold sports cards. If only that was today as my only options now are online or Walmart.

Anyways, even though a lot of places sold sports cards locally, only the pharmacy had the 1996-1997 Stadium Club basketball I desperately craved.

The design was pretty simple, but eye appealing. The players named were embossed with a rainbow shine. A team color ran down the side with the name and as always with Stadium Club, photography took over. The subsets had lots of foil and looked great as well. It was more about the base design for me.
Here is a short gallery of an eye-appealing look at these and some comments by me for each as well.

B.J. is ready to defend! 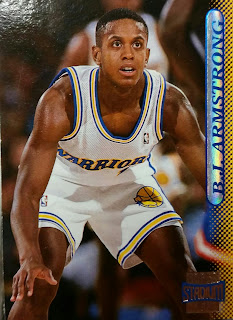 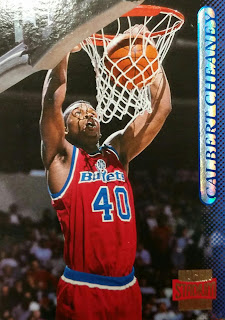 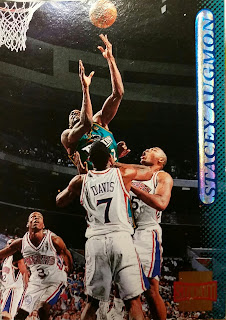 Geiger standing tall over all the rest. 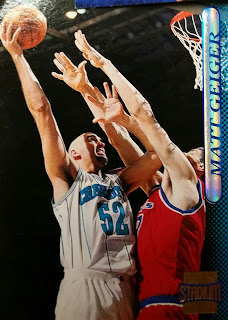 I couldn't let this gallery end without tossing in one of my favorite Knicks of course! 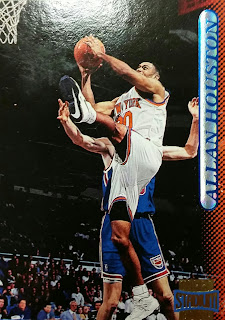 I also busted these because I was in the middle of my Kobe Bryant hunt looking for anything with his name on it. I did manage to pull a couple of rookie inserts of him that stayed in my collection for years before my dad claimed them when I moved out. The inserts overall in the product were really solid with lots of shiny and tough pulls.

When I was going through my sorting project, I found the ones above along with a few others I held onto over the years that took me back to those trips to the pharmacy and pulling a pack out of the display case and running out to the car to look for my favorite players and Bryant.
This is what this segment is all about, those iconic childhood designs that bring back those memories.

So does 1996-1997 Stadium Club have any meaning to you? Did you ever buy cards from the pharmacy? What are your thoughts on the design overall and if you bought some, what was your best pull? Let me know in comments!
at February 27, 2017