2013 became the first time I started to appreciate NCAA football cards from Upper Deck. Not being a big college football card fan, I mainly strayed from collecting it even though I have always loved what Upper Deck brought to cards.

But, something with 2013 caught my attention and I started to collect and appreciate Upper Deck's college football efforts more even though NFL still took more of my money. It must have been that highly touted football rookie class that turned out to be a flop. But at the time for me, it was all about finding Geno Smith in packs as I thought he was the next big thing. 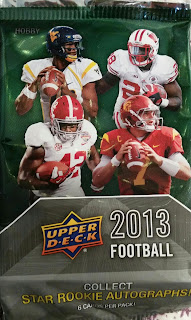 Four years later, I am still wrong about that. At least I got some enjoyment of opening this product and pulled my first ever high-number Sp from a few hobby packs I picked up.

So how bout you guys? You bust lots of 2013 UD looking for those top notch rookies? Do you bust it now? Thoughts in comments are welcomed as always!
at February 17, 2017