I know it's a bit strange to show off a segment called Mail Day Saturday on a Wednesday, but, I had to show this nice package I got in the mail this week to celebrate #SCC5Year and since I normally on share my mail days on Saturdays, I stuck with the name.

I recently did a trade with my buddy Tim, @skukman1998, who I have known the longest since getting into the social media age of collecting. We always do surprise ones to each other so you never know what to expect. As always, Tim's package delivered some great stuff.

Up first, some Yankees Chrome shiny adds. I miss Cano in pinstripes. 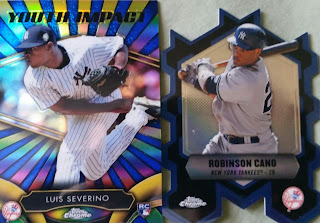 A nice round of some G-Men here, all new. Digging that Odell insert. 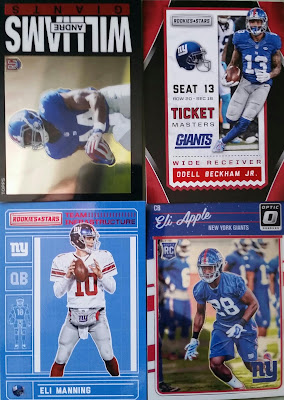 Up next, Green Prizm of Eli and a /25 gold parallel of Geremy Davis. These are new as well. The Davis is really cool as the background is inset and he pops off the cardboard. I really wished the Giants could had given him one last chance. 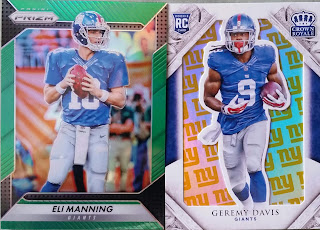 Odell snagging a catch over an Eagle, yes. Chrome and refractor appeal, yes. This is one great looking card and it also brings me back to when I chased down all of the 1,000 and 3,000 yard clubs on the later 90's. 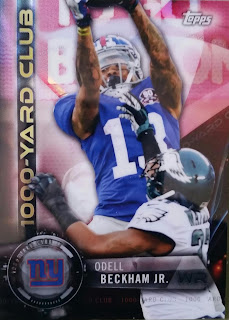 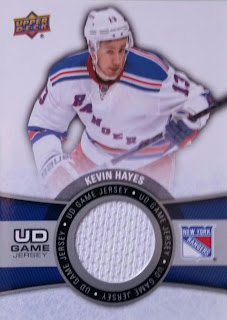 A couple sparkling new relics of Giants stud WR Sterling Shepard. I would had loved to built a nice PC around him, the problem was his cards costed so much. I at least have a few good ones now. 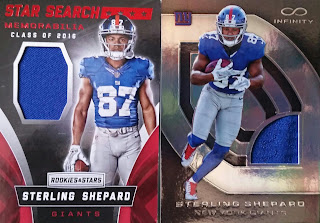 Loved adding this this Eli! I have the base version, but not the pink parallel and this card really stands out. The red jersey also is a nice touch. 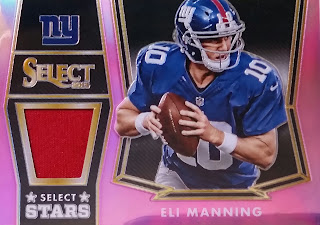 Speaking of studs and cards that stand out, this Eli Apple Prizm auto....😮😮😮😮😮 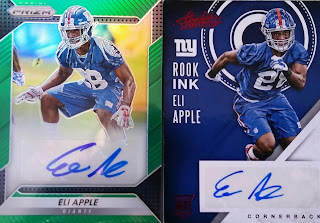 What a great mail day to celebrate today!
A big thanks goes out to my buddy Tim and I look forward to our next trade. I will start setting stuff aside for you again.

Thoughts on any of these cards are welcomed in comments!
at March 01, 2017