Coined In The Hobby

Since the late 90's I have been waiting for the word coin to find it's way back into the sport card hobby. I think the two hobby's coincide nicely for any of us who busted Pinnacle Mint back in the day. One of my favorite products back then.

I can't say I am a die-hard coin collector or have extensive knowledge there, but I have saved onto a few coins over the years from family members who have handed them over. Nothing valuable, but cool looking ones.

But, Upper Deck's recent news on their Grandeur Hockey Coin Collection got me a bit excited that maybe coins and cards will be back together at some point. For now, they are two seperate things but I like the way Upper Deck is releasing these coins. More on why soon.

First here is some background info on them. The first series of the coins are minted in one of four finishes of precious metals and feature 20 hockey players. The collection includes 1 oz. 99.99% pure silver coins available in three finishes and rarities.

You can purchase these coins through Upper Deck e-Pack®,Canadian Imperial Bank of Commerce (CIBC) banking centers in Canada and on CIBC.com/UpperDeck. The coins may be purchased individually in a sealed blind pack for $100 each or as a collector box with four randomly inserted coins for $499. The collector box promises one of three rarer coin.


Here are the list of players you can find:
I think the one thing about these coins that jumps out to collectors first as I have seen across Twitter, Facebook and forums is the cost and the "blind packaging" aspect and the cost. This is not something that coin collectors normally deal with, but it's something all of us card collectors do.

Here is why I find the "blind packaging" aspect a good thing.
I think this newfound adventure for Upper Deck may start a little slow as everyone will be hesitant to give this a try, but I think they will do okay with it. I would like to see some actual coin collectors give this a go and maybe they would like to give cards a try while they are at it. I know they are usually ones who buy exactly what they want and not take a risk with the "blind packaging", but the risk may pay off with a nice rare coin.

Also, who knows, maybe some card collectors crossing over to collect coins. Sometimes one thing leads to another.

What I am really hoping for out of this is a repeat of the late 90's when coins and cards were together in sweet harmony. Whether Upper Deck pursues that adventure, time will tell. Hopefully they will see this post and will get my many dropped hints on this.

Here is a full blown gallery of the 20-players to collect: 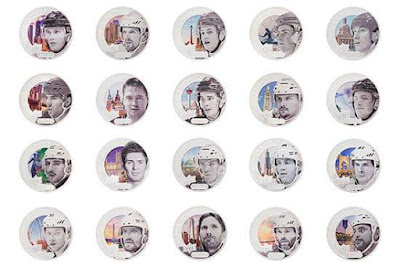