Was there any better revival than Upper Deck's Fleer one? I really can't think of one.

Fleer Retro was released for three sports a few years ago. It was a combination of everyone's favorites from the 90's. Today's wrapper helps brings us back those memories. 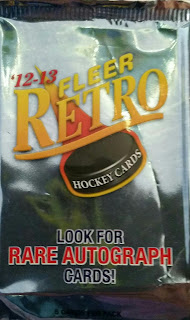 Retro had such products like Ex, Fleer, Flair Showcase, Fleer Metal and a few more all wrapped into one awesome product.

I had bought and busted a couple boxes of football in 2014 that landed me PMG's, Precious Metal Gems, of Blake Bortles and Teddy Bridgewater which at the time featured two of the popular rookie QB's. I also busted a box of hockey above which I didn't fair well with.

The box was actually damaged from one of the online retailers that wouldn't replace it after I sent multiple pics. Luckily, UD stepped in and sent me another box which is something that they really didn't have to do.

How many of you busted the hockey Retro version? Any version? How did you do? What was your favorite part? Let me know in comments!
at May 03, 2017