I have been wanting a card with a gem embedded for sometime. I don't know what it is about it, but I think it's pretty cool and unique. Something a bit more exciting than pulling a single color jersey card.

But, I can never pull one and many of my trading partners didn't own one. So I took to eBay to find my cheapest option. That came to my surprise in the form of the 90's....

I didn't know the 90's had Gem cards til I started seeing them pop up in my searches and they look pretty cool.

Back in 1997, Pro Line came out with a line of them called Gems Of The NFL. They were found in packs 1:24 inserted as redemptions that can be sent in to get a 23K gold card with an actual sapphire embedded into it.

When I saw this Terrell Davis for $2 I had to grab it. I needed my first gem card and here it is, 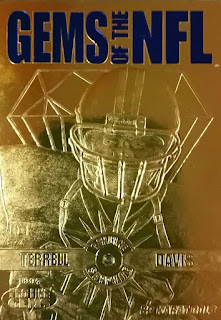 A picture of the gem closer 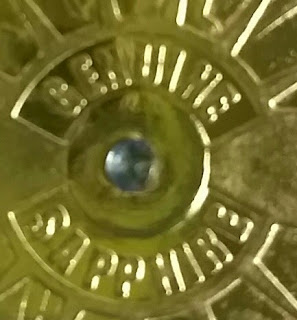 At the time I bought this,  last November, I had planned on building the set since most were affordable.  But, now, without hobby funds I haven't added any and don't see a chance to in the future unless via trade.

Thoughts on today's pretty sweet add is welcomed in comments!
at September 21, 2017