Tales From The Card Show Part 1:The First Time

Back in the late 90's, we had something here that was called a Sport Card Show. I am sure many of you find this relevant in your area still but not where I am. 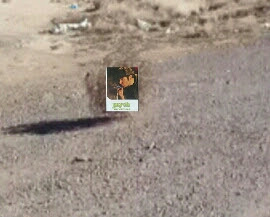 It's a sad, sad place to collect.

But, I remember a time when it was thriving here. Cards everywhere, a card shop 15 minutes away and a monthly card show. It was a beautiful thing.

I also remember my first card show. It was held at the local Moose Lodge/Elks Club where it was held for a few years before dissipating. There were roughly 20-30 vendors set up, it wasn't a huge show but efficient enough for the area, with most selling sports cards while a few others set up with coins and Beanie Babies. It usually had a pretty big draw.

The admission was $1 to get in, but that $1 also scored you a chance at some prizes. They handed you a ticket and kept the other half that went into a hat for a drawing. That drawing would be for a few packs of cards from the card shop owner who was running the show and the drawing would take place every hour. My father and I would make sure we would at least stay a few hours just to give us a shot at winning and hang out with other cardsies. That's like besties but with cards.

My first card show didn't win me a drawing, but it left memories which meant more. I remember walking around the show seeing so many cards I wished I had. Most of them completely out of my father's price range, so we window shopped. We did however grab a couple of packs of cards before leaving.
They were 1996 Playoff Trophy Contenders. The packs ran a bit high at the time. If I remember right I think we paid $5.99 a pack.
We couldn't wait to get to the car to bust the product so we did it right there with many hanging over our shoulders watching. There were a few guys who were known as "big timers" who stood by waiting for us to hit it big and ready to be the first to try and snatch our hits away.
Sadly for them, there were none to be found. We did however have two packs of base. But, I wasn't complaining or disappointed. The base cards looked really solid with a trophy in the background and a player in the forefront. The cards were also printed on thicker stock and had a high end appeal. 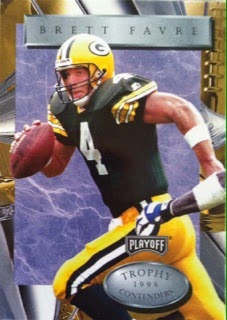 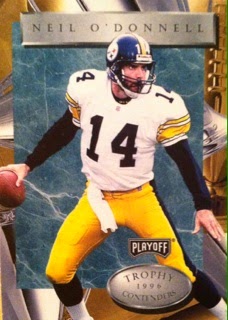 The only thing I didn't like was the rookie cards that weren't rookie cards. Curtis Martin was apart of the 1995 rookie class but was included as a rookie in this product. It was one of my biggest pet peeves. Still is today especially with baseball cards. 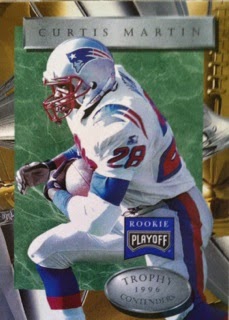 I still have my 1996 Playoff Trophy Contenders and they help me reflect upon that fun day at the card show. It's amazing what a little piece of cardboard can do for your memory.
More from the card show coming up on this blog.
at September 17, 2017