Just Encased You Had A Redemption....

I cannot remember how long ago I got today's card. It was not long after the 2016 Panini Encased product released but I have been so backed up on blogging that it's taking me this long to get it posted.

But, remember when I told you I don't mind redemption cards because I let them go the 4 months so I can actually get something I would want more, well, this was the case. Or I should say, the encase.

At the time I had no idea what was arriving in their place, then this bad boy showed up a few days later... 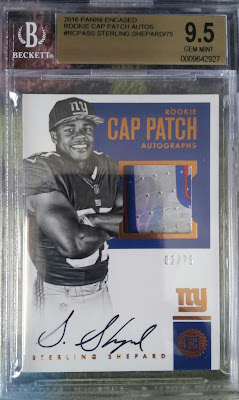 Wow! What a beaut! Now you see what I don't mind redemptions too much? What were the odds I actually pulled this in a box instead of have gotten those redmeptions...astronomical. I never pull PC stuff.