The next edition of What's In The Box was kicked off by a 2003 World Series find then was ended by today's find. Buried in the bottom of the box was something much older.

As I mentioned in that post, I made this wooden box in graded school and since then have shoved stuff in it. I finally dug this box out to see what junk I had collected in it over the years and found some cool finds. None cooler than today's. 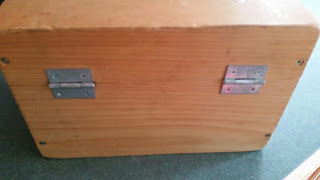 These 1950's Baseball Digests were in the bottom of the box and were a treasure I long forgot about. I think I picked these up at a Yard Sale dirt cheap in a stack of magazines. Of course I don't think I paid the .25 they once sold for.

I am far too young to remember magazines selling for that cheap.

I took a photo of both front and back of each magazine to let you know what the cover was and the contents inside. 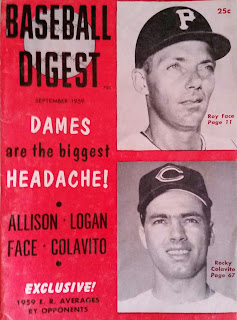 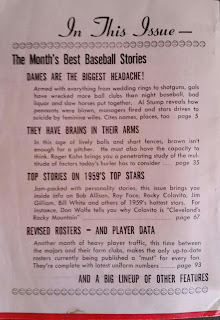 And this one is from September 1958. This one here is almost 60 years old and is pretty mint. 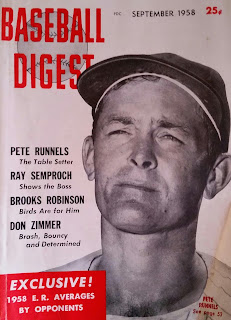 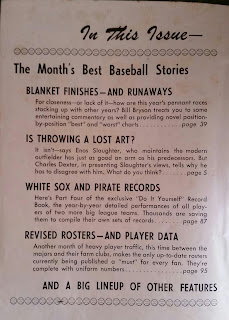 I won't ever complain coming across forgotten treasures like this. I know I have a few other boxes that I need a What's In The Box segment as well and not sure if I will get to it. The next ones would involve more newspapers and magazines that I used to collect and maybe even a couple comic books. I have long forgotten.

Some may call this hoarding with all of this random stuff I have, but I simply call it collecting and someday I hope it all pays off.
at October 26, 2017

Email ThisBlogThis!Share to TwitterShare to FacebookShare to Pinterest
Labels: 1958, 1959, 2017, Baseball Digest, WHATS IN THE BOX