Too Low For Zero

I don't discuss my music likes on here very often, but I will touch base today some on one. I know most bloggers or readers expect the usual heavy metal/rap/hard rock/alternative songs that most bloggers/readers like, but that's just not me.

I am more of a 90's pop/love song, Paramore, Christopher Cross, Eagles, Duran Duran, Hootie And The Blowfish, Chicago, Dave Matthews Band, Goo Goo Dolls, Gin Blossoms, Elton John kinda guy. There are many others I could list but gave you a very short rundown as an example.

I have never been a fan of screaming and yelling songs or songs with language even though I did go through a rap era for a couple of years in 2000-2001. As I have gotten older, I tend to appreciate the songs that I grew up listening to on the radio or heard my parents listening to.

One of those guys is the one and only, Sir Elton John. A little while ago I saw that Autograph Blog had a TTM address for Elton and I knew I had to jump on that. My father listened to Elton all of the time and the one cassette tape we had and played a million times in the car on our way to card shows was Too Low For Zero. That tape had big hits such as, I Guess That's Why They Call It The Blues and I'm Still Standing.

So I wrote Sir Elton a letter and explained my fandom to him, in return, I got this pretty cool mail day all the way from UK, 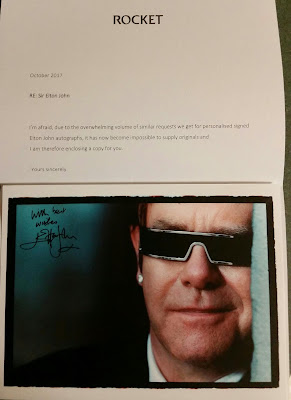 Disappointingly however, is the fact this is a copy which is what the letter states as Elton didn't have time to sit down and sign photos with so many letters flowing in. I think this is a cool piece coming from where it came, but it was quite what I was looking for in terms of nostalgia. So I have sent another letter to the same address requesting it once again. We will see this time if I can score one or lose out again. (update:I mailed this out in October and have yet to hear back. I am hoping that is a good sign)

I still listen to Elton's old and new music today. And of course I picked up Too Low For Zero on CD and listen to that as well to bring back those memories.

I am only guessing, but one of you guys must have a favorite Elton song, so what is it?
at December 15, 2017