Player Profile is a series that breaks down players I have pulled from my collection and designated as a player collection. These are mostly stars from the past and present and only include base cards and inserts. Hits and rookie cards are not counted. Some players I pulled because I was a fan of their game, others are obvious because of their play. Some players I actually look for cards of in packs while others get just placed in these boxes. This series will break down how many cards I have of the player, what my Top 5 favorite cards are of the player and why I pulled the player for a player collection.

This series will also cover all four sports I collect.

Player By The Numbers For Paul Konerko: 55 Different Cards.

Paul Konerko was a very underrated player in my opinion especially in the hobby. A guy who went about his business without a lot of recognition for doing so. Sometimes those are the guys I like the most which is another reason I like Rodney Hampton so much.

Paul quietly was a 6x All-Star, won a World Series in 2005 and was the ALCS MVP that year as well. He also won the Roberto Clemente award in 2014 before calling it quits at the end of that season as well. He was also a captain and leader of that team as well from 2006-2014.

So here are my Top 5 favorite cards for Paul.

#5. Most of us only remember his time for the White Sox, but Paul did play for the Reds for a short time as well. I like having a variety of cards for one player if they played on multiple teams. Paul got traded from the Reds to the White Sox and the rest was history after. 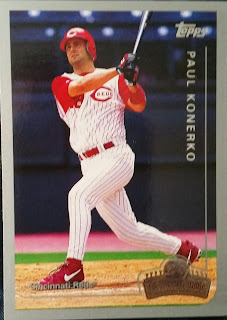 #4 I just enjoyed the photography angle of him getting someone out on base. 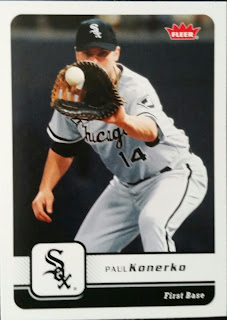 #3 speaking of photography, Upper Deck had to make this list as I assume they will with any of my Player Profiles. There isn't much to say about this photo as I think it speaks for itself. 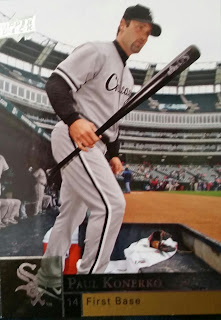 #2. Paul also played for the Dodgers who were the team that drafted him before he got traded to the Reds. I chose this card as number two mainly because of the nice design from Omega, but slightly because it features the team he originated from. 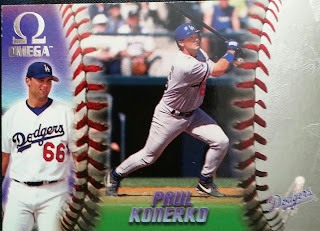 And finally card #1 is this Donruss Studio base from 2005 This design was pretty well done. Paul's stance and the city in the backdrop looks pretty cool. Card also has a "White Sox" tint to it. 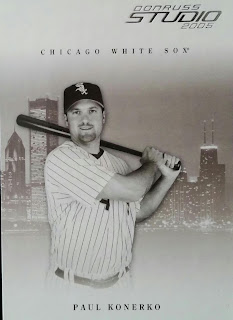 Paul has been well celebrated by the White Sox since his retirement. They retired his number, built a statue of him and celebrated his Game 2 World Series grand slam in their 25th celebration of their stadium.

Which Paul Konerko card above to you like the most and which card do you own is your favorite of his? Let me know in comments!
at February 25, 2018