Player Profile is a series that breaks down players I have pulled from my collection and designated as a player collection. These are mostly stars from the past and present and only include base cards and inserts. Hits and rookie cards are not counted. Some players I pulled because I was a fan of their game, others are obvious because of their play. Some players I actually look for cards of in packs while others get just placed in these boxes. This series will break down how many cards I have of the player, what my Top 5 favorite cards are of the player and why I pulled the player for a player collection.

This series will also cover all four sports I collect.

Player By The Numbers For Todd Helton: 57 Different Cards.

Playing 17 MLB seasons as number 17 of the Rockies, I feel the same way about Helton as I did about Konerko being a "under the radar" player. Of course in Helton's case, I feel it's more. Mostly because he played for an under the radar team in the Rockies. Not exactly the hobby hot spot.

Despite that, Helton put up some great numbers for the Rockies. He was a five-time All-Star, four-time Silver Slugger, and three-time Gold Glove Award winner plus holds many of the Rockies club records.  In 2000, he was MLB Batting champion, MLB RBI Champ, and won the Hank Aaron award.

Let's take a look at my Top 5 favorite cards of his.

#5. Ultra put out some great photographed cards and this is another with a Helton follow-through 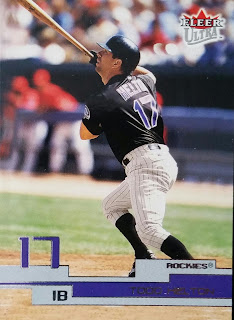 #4 we go from one Fleer product to another. Fleer Tradition put out this nice ground ball chasing Helton. 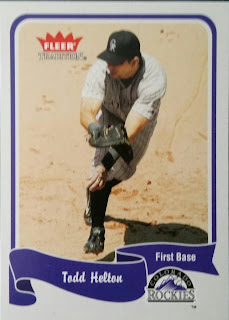 #3 is from 2004 with Helton circling the bases. Or doing some dance ritual. 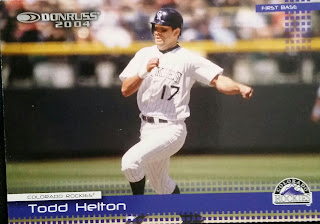 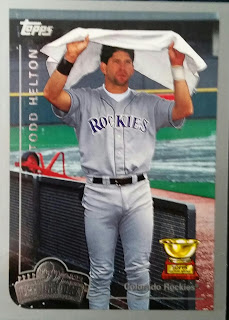 #1 Retirement photo. A treasured moment on the field and on this piece of cardboard. 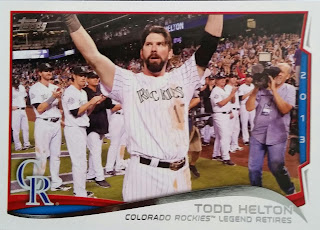 I wonder if Todd will find himself in baseball again as either managing or in the booth. Only time can tell but one can only expect it.

Which Todd Helton card above do you like the most and which card do you own is your favorite of his? Let me know in comments!
at April 15, 2018