Today's mail day is one I got a long time ago from @JGfan24ever. This was actually a three separate mail day mailing from him as he was mailing me gifts left and right. I think he was trying to distract me from the real world problems I was having with my health and life this year.

Every time he sent me a message that a card(s) was on it's way, I was like a kid at Christmas time waiting for my gift to arrive. You know, that slow motion moment you come walking down the stairs to see the red bike you have always wanted. This may actually also be a reference to the movie Dickie Roberts. A great David Spade movie by the way if you haven't seen it.

The first mailing I got from Michael had some solid Giants within.

First this Evan Engram/OJ Howard Contenders dual. It was rumored as the draft went on that the Giants could be looking at Howard with a few tight ends still on the board when they drafted, but they grabbed Engram and glad they did. Kid's got game. Just hoping the concussion in the preseason win over the Jets doesn't have too much of an effect on him this year. 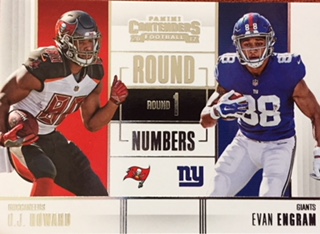 Speaking of Engram, here's another from the very popular 2018 Classics football. I have seen so many great hits come out of it and the box I opened on here wasn't the worst break either. 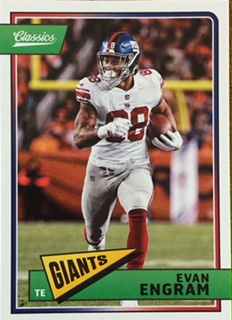 Elite Odell two words that go hand in hand. At least his big payday showed it.. I really like the look of Elite this year with it's rainbow foil background and a blurred out but noticeable picture. Much better than the past issues where it was just a straight up foil background. The card stock is also thicker. Here is a parallel from Elite. It's hard to see but it has a block parallel shine to it. It is also numbered to 299. I am glad Michael sent me these Odells, I just wished he would also send me Odell in my Fantasy Football league as well and I will keep trying to pry him away til I get him! 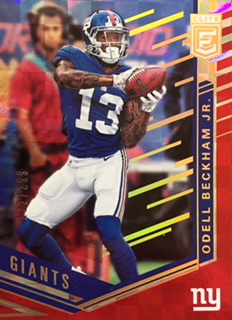 The next mail day had a hockey Young Guns rookie that I will show off in another post as this post is True Blue but it also had this 2018 Certified Kyle Lauletta relic I will show off. Michael pulled it from a box break and knew I would give it a good home. Lauletta has a great chance to take over for Eli Manning when he retires. He has looked impressive in the preseason standing in the pocket,taking hits and using his legs as well. The touchdown vs the Lions in the preseason was amazing how he made defenders miss like an all-pro running back. Keep an eye out on this guy. (also keep an eye on where the relic is on here as that is tape marks on the case and not the relic) 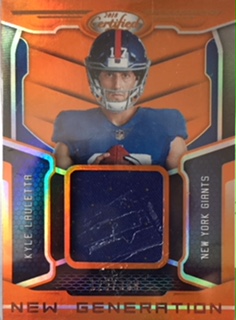 The final card was a separate mail day from @DMNTakeover where Michael snagged me this really amazing Andre Williams Panini Immaculate Glove card. It's the first NFL glove card in my collection. I really like the multi colored relic here. I just wished Williams had done more with his career or at the very least acknowledged my vast collection of him. Or even at the very, very least, had used these gloves to hold onto the ball. 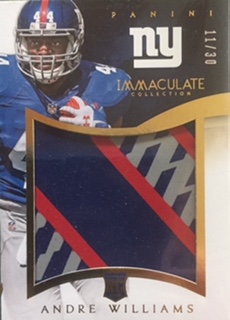 A thank you goes out to Michael for the trio of gifts. Sorry it took me so long to post it as I have piles of mail days to post. Thanks for keeping me distracted through this tough year as well. You are an amazing friend.
at September 02, 2018