The Origins Of A Cardboard Addict:A Chip Off The Old Block

Some people may say "I am a chip off the 'ole block" when it comes to what I am into compared to my father.

First off, we both are MASSIVE NY Giants fans. We stay in contact every Sunday during the games texting each other about the defeats, the big plays and the stupid ones.

Secondly, we both like the NY Yankees. We show our #PinstripePride ever since the 90's.

Third, we both collect sport cards and collect them pretty comparably. We both like our rookie cards, we both sort and organize the same (something I taught him back in my youth), and we both can't turn down Topps Chrome. It's like a super collecting hero weakness.

One other thing we know, is putting in a good hard days work.

I grew up on a dairy farm pretty much my entire youth life. Back when I was really young, my father worked on his friends farm who were an older couple. I treated them like they were my grandparents.

Ray, was very old fashioned and believed kids needed to work so I remember staying overnight and him waking me up at 4:30 in the morning to gather the cows to the barn. I wasn't sure how I felt about that then, other than being tired, but it's something I can appreciate now. He would also displine you by grabbing onto your ear and making you sit. Let's just say, I didn't get into too much trouble on his farm after the first few times.

Erma, Ray's wife, was the typical nice old lady. The one you would hear about baking cookies and a delicous meal. The housewife. Sometimes when I wasn't busy on the farm helping out, I would take a grocery and errand run with her and was able to pick myself out a treat while we were out. Despite the glares that Ray would sometimes give when we returned. He valued every dollar.

If only he valued his health as much. The dude would literally take a stick of butter, dip it in ketchup, and would eat it with his supper. This is not a joke either, it was disgusting. On top of that, he would butter everything else. He would also have us save the pickle juice from pickle jars and chug it. As you would expect after hearing this, yes, Ray did pass away years ago from a heart attack behind the wheel. I felt a piece of my childhood rip away hearing that news. Erma lived a few more years after that but in a nursing home where I never got to see her again. I may not have been able to say goodbye, but I do have the memories.

After a ten years of working on Ray's farm, my father decided it was too much on him and changed careers to work at a cheese factory. He was the supervisor of his line and broke some company records for getting his employees to box up the cheese the fastest. It was pretty cool but you could tell he wanted to be back outside again. Back to his life roots of farming.

So we ended up moving after 5 years in the factory to another farm. He got to do what he loved best. On this farm, the owner was a bit younger, probably in his 40's, so the expectations for me weren't as high. In the summertime, I actually helped with haying which means 90 degree days out in the field picking up bales and putting them away. But, that's okay. He actually paid me $10 an hour for doing so.

During my downtime however, I would walk past these guys-and say hi of course- 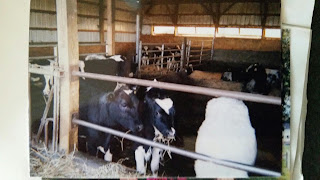 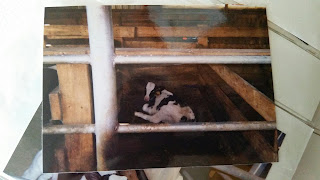 and play basketball in the empty silo, his was a rocked in area, where the farmer set up a hoop for me. So I always chipped in to help him when I could.

In 1997, Playoff chipped in the hobby with their innovate Chip Shots sets. They put these one-per-pack finds in both their 1997 Absolute Football and the 1997 Playoff First and Ten football. The only difference between the two sets is the color schemes. First and Ten has green, red, and yellow base chip featuring a striped pattern of one white stripe within two stripes of either red, green, or blue. While the Absolute has green, red, and yellow base and the edges of the coins feature a striped pattern of two silver stripes around a single stripe of either red or blue. None of the colors were tougher than the other in terms of finding them.Sounds more complicated than it is.

The First and Ten set also had 250 chips in the set with the first 200 chips in hobby and the last 50 found in retail. The Absolute version had 200 total.

Here are a few samplings I got from my mail day from The Collector, I have many long before these I held onto since youth. I think I bought almost a box worth of retail at one point and was given chip shots over the years. And if you are reading this and have some, please check for Rodney Hamptons. I am missing a few still.

Let's take a look at these miniature collectibles. I think innovations like this are so cool and it's what we lack today.

Zach Thomas a beast linebacker for the Phins' 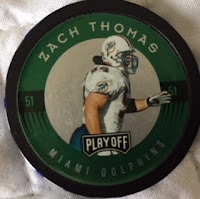 I always felt Tim Brown didn't get enough respect for what he did on the field, playing for the Raiders didn't help. 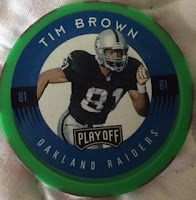 Yancey was just a fun name to say and he also had some talent too. 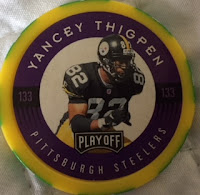 Detmer was apart of the pre-99 draft QB where they were terrible. 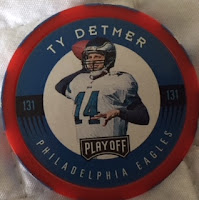 Vinny played for a million teams, but none of their uniforms looked as good as the classic Ravens one. I think their original logo and jerseys look better than today's. 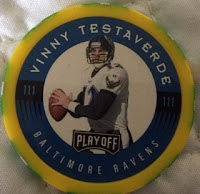 And Michael Irvin, household name in the 90's and a winner. Sadly he also made a lot of plays against my Giants. 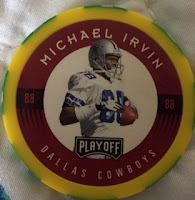 Chip Shots only lasted one year so I am glad to have held onto what I do have. It's hard to think this was over 20 years ago that these were released. Feeling old now? I am.

Just like Chip Shots, my father's farming career is all done as well. Age has played a factor in that especially after doing it for a combined 20+ years. He now does a bunch of oddball jobs but keeps himself busy. I moved out from the farm in 2000 and haven't lived on one since but I always remember the moments I had on them especially when I drive by them. It's sort of like when I pull out these Chip Shots, I remember the creativity this great hobby once had.
at September 20, 2018