My end of the trade involved this super sweet 1993 Topps Gold Derek Jeter that I needed for my PC. I have the base Jeter, but not the parallel. 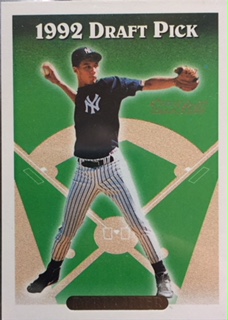 As most of you know, I have really condensed down what I collect for Yankees. The only Yankees I collect is Jeter, Judge, Torres and Andjuar. That's it. Unless it's a cool late 90's insert of course. So this Jeter fit right in nicely.

This also wasn't the end of the trade.

@jmswyo also agreed to send this amazing Leaf autographed memorabilia card of Dodgers prospect JT Ginn to me as well in exchange for even more Royals and Bo. The Ginn was actually the card that started the trade talks between our two teams. 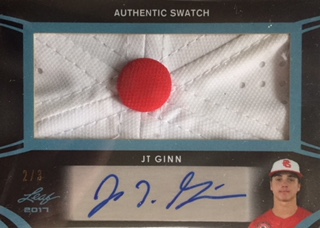 Where does this Ginn fit in my PC? Well, one it's a prospect. Two, it fits in my unique swatch PC. I have never seen the tip of a hat used as a swatch before. Card is pretty stunning in person. One of my next goals for this PC is to find one of those oversized football shield swatches and a big cleat one. Those are pretty nice relics.

Thanks to @jmswyo for our first trade. I am hoping there will be more of them down the road as well.
at October 06, 2018