The Origins Of A Cardboard Addict:Fishing For These

There was always sports and sport cards in my house when I grew up. But, another thing that was always there was fishing. Remember a time when kids got excited to go out and do something? I do and I was glad to be apart of that era. This whole texting, Tweeting, video gaming, electronic driven world is insane. Even though I do some of those things, I would take an outside day of fun anytime over those things. Including blogging on here.

I remember going out at 6am and digging up worms in the backyard. We would bring out an empty yogurt container filled with dirt and store the slimy slippery "boogers" in there til we left. Sometimes though, my father would just buy worms from a guy who would come to our house with a truckload of Styrofoam containers of them. I don't even remember the guys name, just remember it looked like a deal going down with my father exchanging money for a white Styrofoam container. But, most people just knew that guy as the worm guy.

No matter how we got the bait for fishing, usually around 7 am we would head out to the brooks. We would park the vehicle at one end and fish all the way down to another town and back to our vehicle. It would make for a long, long day especially starting out so early. But, as most people know who fish, you gotta start before the sun comes up so the fish won't see your shadow and be scared off.
Most of the time we would catch our daily quota of 12. Some were good sized, while others were not. At some points I wouldn't bother fishing and be the "fish caddy" and carry my father's equipment around and the caught fish we would "hang"on a broken limb. Either way, it was a father and son bonding time and it taught me how to fish. I even learned after we got home how to gut and fry them.

Sadly today,we don't fish anymore. I haven't only gone out once since I have been an adult and for some reason or another, I don't like seafood either. The occasional Lobster Roll, but that's it. I just don't like the "seafoody" taste.


One of the things that I still fish for are 1997 Fleer Ultra Baseball Gold Medallion parallels.

Don't get me wrong, the 1995 Fleer Ultra Gold Medallion parallels, all gold cards, will always still be the greatest ones from the product, but the 1997 is second to them just because of the design alone.

Crystal clear photography and borderless color bleed photos is something that Fleer Ultra was known for. They also are known for capturing unique photos and not just the ones of players swinging the bats.

The name in a rainbow foil across the bottom is so eye appealing on the base cards. On a gold medallion parallel, you will notice that the rainbow foil is more gold. There is also a wording of Gold Medallion Edition at the bottom of the card in a white box. These parallels were not tough finds coming in at one-per-pack, so you always got plenty of them when you opened up multiple packs which is what I did back in 1997. I can say I haven't opened any since which is a sad thing.

For now I am just trying to build the base sets of these for both football and baseball, but I also have a good start on the Gold Medallion parallels for baseball thanks to a yard sale five years ago.

Let's take a look at some of these cards.

Quinton McCracken taking a break in the clubhouse. Fun Fact: I for some reason or another considered the Rockies my second favorite team in the 90's despite how terrible they were. But, I always found myself chasing guys like McCracken and Walker. 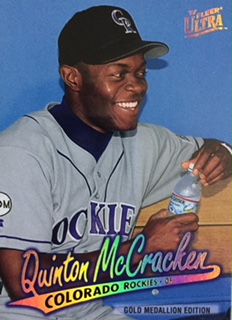 Al Leiter winds up. It to me felt like this guy was in the league for a 100 years. 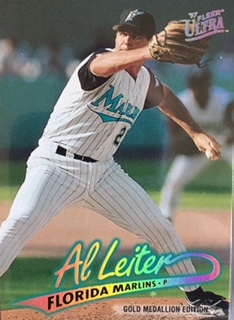 The Yankees fan who didn't love Tom Gordon until he was a Yankee. Yes, this was a Stephen King pun. 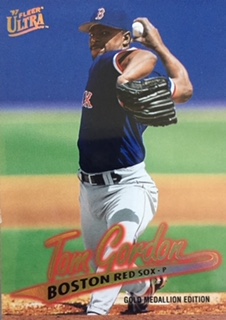 How many of us bought into Todd Hollandsworth back then??? I kept pulling the guy and thought I had a great investment. Well, we all know how that went. 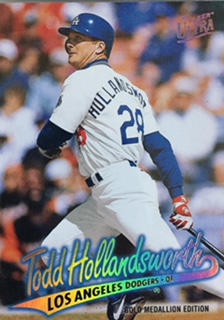 Give a hand to Omar Vizquel. This gold glover is now a gold medallion. I think this is one of my favorite photos in the set. 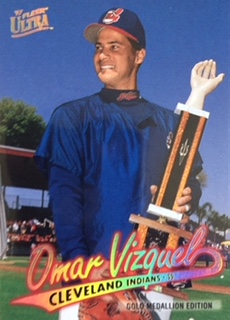 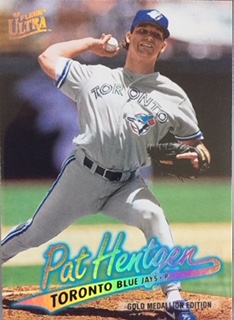 Is it me or do you feel like Otis is still out there playing?? He doesn't look right in a Blue Jays uniform either. 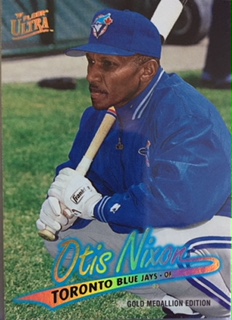 Rusty Greer had one of those names you would never forget in the 90's. 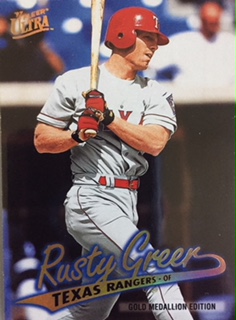 And a Chad Mottola. I didn't know who he was however. 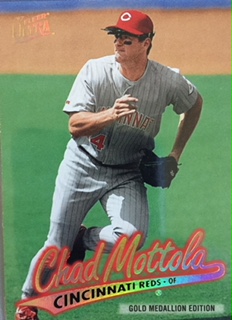 When I talk to my father on the weekends, we do a weekly card chat via phone then, I have mentioned some of the fun times we shared fishing. We haven't ever discussed getting together and maybe going again as we both live busy lives and an hour from each other, but we will always have the memories and at least we will always find ourselves fishing for cardboard.
at October 10, 2018