This Guy Would Be In My Starting Lineup

The main course of a trade between Shane over at Project Pedro blog and myself usually has some meatworthy Ken Griffey Jr cards and sometimes items. Even though most of the time I avoid adding items since I don't have the space in the mancave anymore since I moved it's location.

But every time Shane pulls a Griffey in his Cheap Wax breaks, I immediately get dibs. Well for most of the cards. I think Shane has a couple he pulled in his breaks I have been trying to pry away for years. Some day they will come to their rightful owner :)

In the meantime, this trade added well over 120 NEW Ken Griffey Jr cards to my collection. Yes, 120.

I won't be showcasing all of the good ones off, there were many, but I did choose some to show off. Why not more you may ask, well, that's because my main project in 2019 will be my Griffey PC. I have been slacking on it for years and it's time I finally give it some love like I did my Rodney Hampton PC. That may take me awhile but it will feel so worth it to me.

So let's take a look at what I am showing off with this one,

Starting lineup that Shane had lying around. I said, why not. Years ago I traded away all of my Griffey figures to make room. I kind of regret it. I still also need to chase down the Rodney Hampton ones so if any of you see them anywhere, please snag both for me! 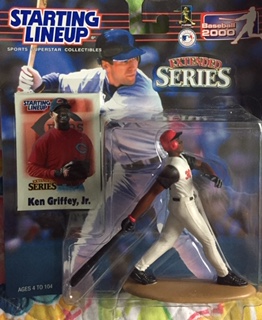 Such a cool card I hadn't seen up close. Now I own it. 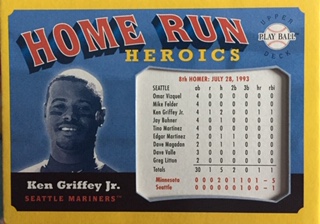 Bat swatch. I wasn't ever a fan of Upper Deck "branding" the swatches though. Kind of ruins it I think. 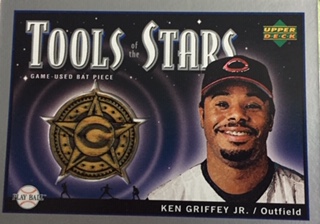 And finally, an awesome stamp card. I would sometimes rather see one of these cool things than a white relic swatch. 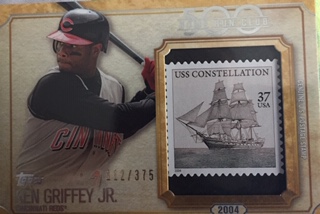 There is still one more part to this mail day I am showing off and that one will be some nice additions to my non sport PC.
at December 31, 2018