The Origins Of A Cardboard Addict: It's Just A Little (Man) Crush


I see ya throwin a football
It doesn't take a scientist
To understand what's going on, Kerry
If you see me watching you with my eyes
Let's not over analyze
Don't throw too deep with it, Kerry (Kerry)

It was late 1990's and I had finally gotten my foot through the door with playing football. My parents couldn't afford for me to do it any other year so I at least had one year to figure out if I wanted to play once I got into high school. High School football was free as long as you kept your grades up.

Being the size I was, I was hoping for a top offensive position such as running back, wide receiver or even quarterback but instead I was a lineman. A skinny but tall lineman.

Even though it's a very important position and I can't stress how important it is as it can win you games, it's still like playing right field in Little League baseball. You weren't one of their favorites or even that great at the sport, but they had to play you so there you go to right field or as a lineman.

Maybe that's just how I felt. 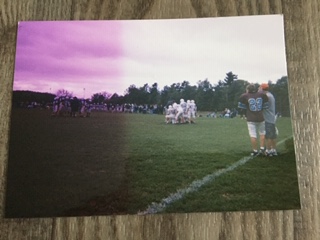 So here I am out there, in white in this photo, getting ready to break huddle so I could block for the Quarterback. That's one of the very few positions I never even had a chance to try in football (high school football opened the door for me to try other non lineman positions) even though occasionally with buddies I would toss the ball around pretty efficiently. I felt accurate, but just didn't have a lot of arm strength which is a big key.

Quarterback is that position you could say a lot of players had a crush on.  It was the position that got all the girls, the attention and was what you could build a team around. The most important position on a team.

And that's why in 1995, the inaugural year of the Carolina Panthers, they selected the player to build their team around in Penn State's Kerry Collins. A player I quickly became a fan of.

I am not able to explain why I was a Collins fan, just turned out that way. It could have easily just been because I liked the new team in the league and their logo, I was 12 at the time so anything new and flashy for me was exciting. I tried to watch Panthers games whenever they came on TV which I can't remember how often that was, but I think I did get to watch a few.

Kerry didn't have the most successful rookie year with 2,717 yards along with 14 TD's and 19 Int, but played in 15 games for a brand new team to the league so it was a rookie year for them all. However, the team did finish 7-9 and built off from that for the following year under Coach Dom Capers.

For a few years in my youth starting in 1995,  I spent time grabbing a few Kerry Collins when I could and held onto them. I even traded guys like Steve Young, Jerry Rice, Emmitt Smith, and Barry Sanders with friend collectors to land some.

Recently I was able to pull off a trade with @CardpocalypseNC that landed me a few new ones back when Kerry was with the Panthers. He played four seasons for the Panthers and led them in his second year to the NFC Championship game. 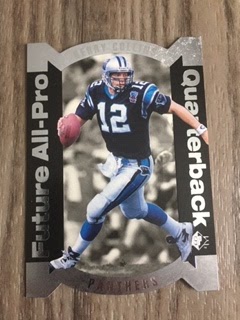 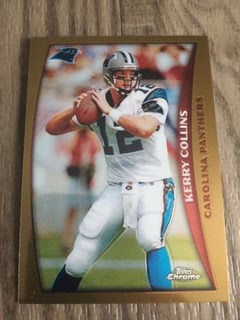 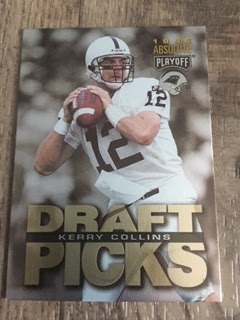 I was really starting to enjoy my new collection of Kerry Collins. It was a small one, but slowly growing unlike Kerry's career at the time.

After a 21 interception season in 1997 and an 0-4 start to the 1998 season, Kerry wanted to sit back a few games to think things over but instead was placed on waivers and traded to the New Orleans Saints where he continued to struggle. It felt like his career was going downhill and his life was as well with his struggles with alcoholism.

So he was sent to therapy and rehab to get better.

Then two amazing things happened for the 1999 season. Kerry not only was back to play football, but he was signed by my Giants who had been in desperate need of a quarterback after Phil Simms retired. So not only was one of my favorite players coming to play football again, but now play with my team! 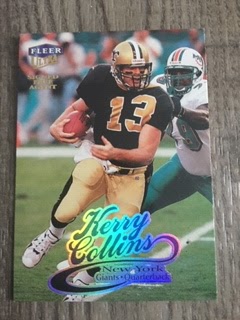 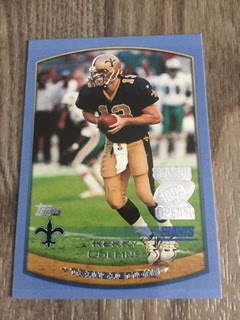 These were some of the first cards of Kerry's transition to the Giants. I was excited at the time to pull them.


Collins started the 1999 season as the Giants' second-string quarterback behind Kent Graham, but claimed the starting job in Week 11 as Graham struggled with a 5–4 record. In the 2000 season, Collins led the Giants to Super Bowl XXXV, where they lost to the Baltimore Ravens. After five seasons, 68 starts and 16,875 yards, Collins was released by the Giants in 2004. The Giants had signed former league MVP Kurt Warner and traded for 2004's top draft pick, Eli Manning.
After Kerry left the Giants, my collecting of him disappeared as well. Especially when he landed in the Black Hole in Oakland which is a team I have never cared for. He went from there to Tennessee with the Titans where he played occasionally and was released. He quickly retired but ended up signing with the Indy Colts to backup Peyton after his neck injury but released from there and finally retired for good.

Even though I never kept on collecting him after he left, I still kept my eye on him and rooted for him to succeed.

Kerry's stint with the Giants was his most successful of all of his stops. It was his one hit wonder just like Jennifer Paige's song It's Just A Little Crush back in 1998. And just like I brought this song back to life for the hobby, I have been adding some more Kerry Collins cards back to my collection while I am in a slump with Rodney Hampton.

Collecting Rodney has brought back some great memories and I know adding Kerry into the mix now will as well.
at March 21, 2019