The Origins Of A Cardboard Addict: No Doubt

There is No Doubt by now you know about my passion and love of the 1990's and how much nostalgia I have with them. To me, it was the greatest era ever especially compared in the world we live in today.

We No Doubt had the greatest food, music, movies, toys, television and cartoons.

We also No Doubt had a music group known as No Doubt who had many big hits and catchy songs in the 90's such as Trapped In A Box, Spiderwebs and Just A Girl to name a few. I was intrigued by the group, the music and No Doubt the lead singer Gwen Stefani, that I followed them for a long time til Gwen decided to branch out on her own. Which didn't bode well for me as I didn't like any of her solo stuff. It was probably the 90's fan in me who only enjoyed listening to the group that I did back in the day.

As an adult, I have grabbed CD's of music from my past and had No Doubt that I would still enjoy it today. I originally had each CD that No Doubt put out but decided it was time just to condense it down to a Greatest Hits album so I can just have those songs I once listened to revisited again. 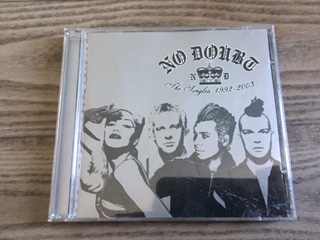 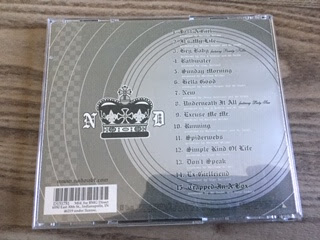 There were many great hits on here including some newer releases the group had in the 2000's.

However, one of the catchier tunes No Doubt for me was off from their released album from 1995 Tragic Kingdom in Don't Speak. I don't know what it was about the song, it was just one of those songs that got caught up in your head and you just sang it out.

Even though the song was supposedly about Gwen's breakup with a No Doubt band mate, the only breakup I was worried about at the time was my local grocery store no longer carrying one of my hobby first loves in 1995 Score Football. It was my go-to every time I went to the grocery store No Doubt!

One of my favorite things about Score besides the base card set that appeared to have a ripped bottom design, was No Doubt the Red Siege parallels. These parallels took the base set and added a red foil on it. Nothing too exciting, unless you were 12 like I was. The words Red Siege appeared on the back of the card in case the change of look on the front wasn't enough for you.

These parallels fell 1:3 packs and is a set, just like with the 1995 Summit Ground Zero, I am attempting to build. However, this one is a bit bigger with 275 cards in it.

Recently, @CardpocalypseNC helped me knock a few more down from my needs. Aaron Glenn played cornerback in the NFL for 15 years and is currently the coach of that same position for the Saints. 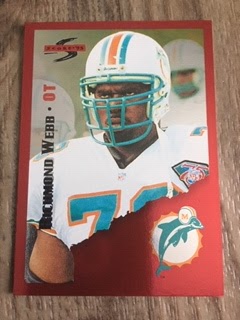 Richmond Webb did an excellent job of blocking and protecting Dan Marino. 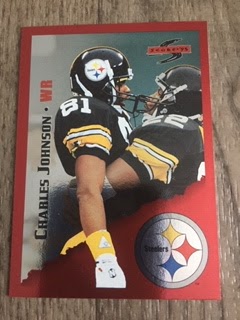 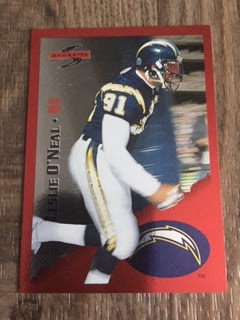 Leslie O'Neal was a dominating defensive end who played in the NFL for 13 years mainly with the Chargers. 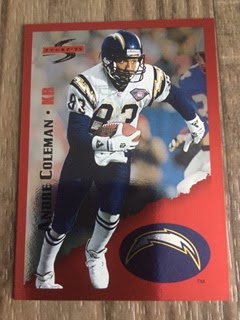 Andre Coleman played roughly four years in the NFL mainly as a kick returner. He has several Super Bowl records including a 98 yard kickoff return touchdown in the big game despite the Chargers dismantling in Super Bowl 39 by the 49ers.

I am wondering if you like the design yet?? No Doubt I am! Warren Sapp was a beast on the field for the Buc's. If only he could have stayed on the field and not off where he got into trouble often. 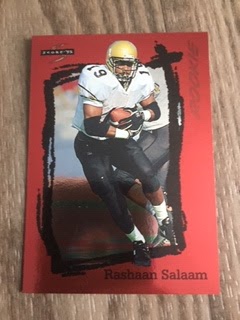 Rashaan Salaam was the man you wanted to collect in 1995 coming into the NFL as the Heisman winner, the only problem, he didn't pan out and only lasted 4 years in the NFL. Sadly he is no longer with us as well as died three years ago.

The rookies looked even better and this was a time when college football was in an NFL product the right way. Not like it is done today. No Doubt 90's cards did everything right.

I currently have 13 of the 275 so I have quite the journey left on these. But, No Doubt I will try and complete it all. You can find my haves HERE in case you have any kicking around to trade or donate to my cause. No Doubt I would enjoy them!

While I have this CD out, I might as well listen to a few tracks. No Doubt it will take me back to the 90's and I won't mind that at all since I turned another year older yesterday.
at March 20, 2019