The Origins Of A Cardboard Addict:Ouch!

One time I was hit in the face with a fast moving football. It was those hard rubber kinds to.

There was another time I tripped and fell on another kids leg playing football on recess and broke his leg while injuring my back.

I also was slammed in the nose pretty hard going for rebound causing a nose bleed.

Then there was the time I caught a fast hit wiffle ball with my barehanded causing a blood blister. Which at the time I had no idea what had happened to my middle finger. Except other kids found it funny when I showed them. The teachers not so much.

Another time I was riding my bike down a steep hill and the brakes went, when I tried to stop I obviously couldn't, I got caught up in some loose sand and flew over the handlebars hitting my face into the ground.

A lot of times there were bandages to help cover up any scratches and cuts, then there were also bandages you ate.

Ouch bandage gum was made by Wrigley in the late 80's/early 90's with each gum wrapper featuring a bandage design and packed in a tin to represent a bandage box. The gum evolved into three flavors in the 90's since it's earlier beginning. It was a product my sister seemed to enjoy multiple times and not something I ever personally bought for myself. However, once in awhile, I was able to get her to share a piece and I didn't think it was too shabby. I still preferred Hubba Bubba but this tin brings back those memories of her carrying it around like she was a nurse. She would sometimes after finishing up the gum put real bandages inside or would use it to store her smaller plastic nurses toys in. Guess who always had to play the patient...yeah.

When it came to the hobby of sport cards, it recently felt an Ouch itself when Press Pass cards left us.

Press Pass produced many great products over the years for football, basketball, non sport and NASCAR which is a sport they did an amazing job with. But, it seemed they weren't keeping up in the hobby so had to close sadly.

Back in the 90's, I had my first try of Press Pass with multiple sports I purchased. Back then I considered all of their cards to be rookies up until I saw that Beckett didn't consider them that way. The hobby was based off from Beckett in those days so you abide by what they valued and called cards. So I moved them all into a binder of their own away from the "true rookies"

Press Pass at the time had multiple collegiate licenses which helped make their products unique on their own. Towards the end of their time in the hobby, they were down to just a NASCAR license, some non sport and football cards without logos which was sad to see.

The 1998 Press Pass basketball was one of my favorite releases of theirs thanks to a reminder from Wes who sent some along in one of his packages. I have one other Press Pass product from that time that tops it, but that's for another day, another post.

Let's take a look at some of my favorites from 1998 Press Pass basketball, 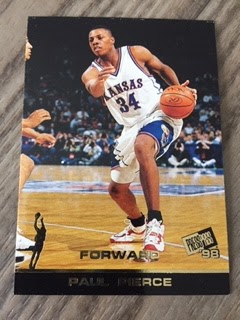 1998 Press Pass basketball wasn't the biggest set in the world, but 45 cards of rookies was still there to chase. The design was basic, but worthwhile and the photography was well done just like this Paul Pierce card. Plenty of good names to find as well along with Pierce with Duncan and Carter. 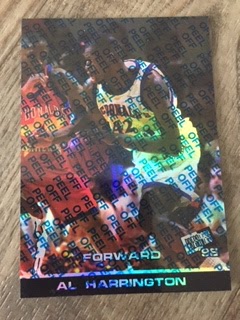 Absolutely beautiful parallels you could find. Reflector comes with the same appeal and look of a Finest refractor. I can only imagine what this would have been like as a product on it's own. These had my attention immediately when I found them in packs. There were other parallels in the set like red and torquers, but they weren't stunning like this one. 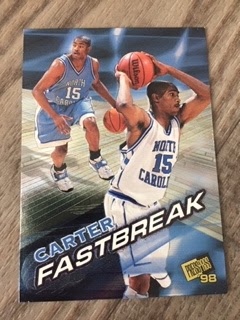 Fast Break had a fun design and color scheme. This one is of Vince Carter 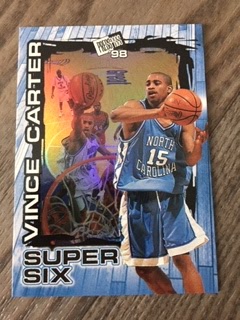 Super Six gave you a Upper Deck UD3 kind of look with a rainbow foil player appeal in the background. Sort of giving it a 3D look. 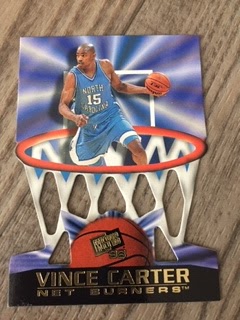 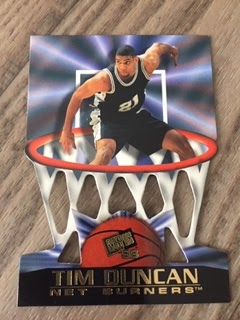 There were other inserts to find as well, but these Net Burners were my favorite ones and I believe the most common to find falling one-per-pack if my memory serves me right.  Press Pass knew had to make a great looking die cut card and this is just one example.

Press Pass '98 basketball however was really built around it's autographs at the time, but I was never fortunate in landing any in the 5 to 6 packs of it I bought from the local gas station. I was always hopeful, but no magic was ever found. Then the product was a one box and done there and I wasn't ever able to get anymore.

That was another ouch from the 90's.

Press Pass thanks for the memories over the years. I still seek out your cards especially from the 90's.

As for today, I always hoped I would leave my bad luck of injuries behind in the 90's when it hit the 2000's, but as many of you know, I have had plenty of ouch over the time since and especially the past five years. At least these ones were dealt with by a real nurse/doctor and not my sister carrying around a fake metal bandage case.
at March 23, 2019