The New DJ In NY

In New York, there is a new DJ in town. Nope Derek Jeter didn't return, it's the NY Giants first round draft pick, Daniel Jones.

When it comes to cardboard, I don't have much at all in terms of Daniel Jones as opposed to the old DJ in NY which I have 300+ of.

I am still waiting to get a Jones autograph in hand and have watched many cheap ones leave eBay over the last few months since they drafted him. Including for $24.

The funny thing is I have put myself out there the last few months looking to trade for one and not a single bite. Last year I already had two Saquon autographs by now and he was by far the more popular pick.

At least I have some friends like @JGfan24ever who set aside guys like Daniel Jones and pass them along. In my recent mail day from Michael, I knew an autograph was coming but did not know about some other nice surprises within. 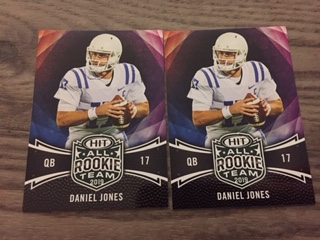 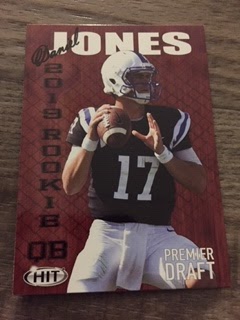 Base DJ from Sage Hit 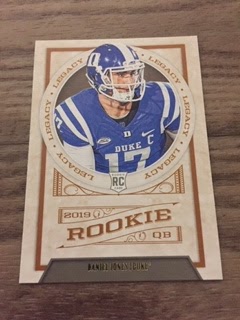 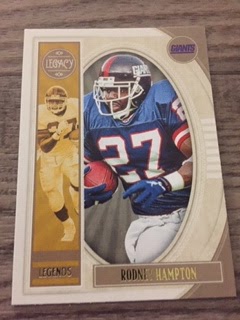 Rodney Hampton base from Legacy. 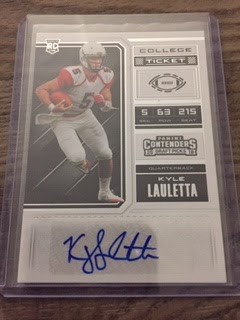 And the autograph that I knew was coming. A nice College Ticket of Kyle Lauletta who still has a shot to make a roster run.

A thanks goes out to Michael yet again for another nice mail day. I hope to send you something else a little ways down the road to hit ya back.

In the meantime, readers, do you think the new DJ can live up to the old DJ and how popular he was in NY? For me, time can only tell.
at June 24, 2019