Leaping For This Autograph

Last seasons rookie class in the NFL was phenomenal. You had Mayfield, Darnold, my boy Saquon of course and then Lamar Jackson just to name a few.

Jackson somehow put the Ravens on his back and carried them to the playoffs where they were taken down. But still. They didn't look like they had a shot til he got the job. I wished they had actually won that playoff game as I think they matched up better vs the Patriots then the Chargers did. I think that showed once the Chargers played the Pats. That was an awful game.

Anyways, I spent a good part of last season chasing down autograph cards of future studs and Jackson was on my list. Only problem, I couldn't find one available FT.

That's what got me to think a bit deeper. Isn't Dion's Autograph collection a Ravens fan? Doesn't he get autographs from all of the players? Hmmm. Let's search his blog.

Multiple Jackson sightings on there. They may not be autographs from a card company, which is my much bigger preference, but I know these are authentic at least and he is a good trader so I approached him about a trade.

And as always, he was more than happy to and gave me options of which ones to choose. 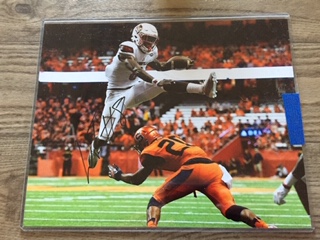 I chose this option as I am a geek for great photography as well. His signature could use some work but not his signature moves. Look at that leap!

This doesn't mean I am still not in search of an autograph card, but for now this will due.

Thanks goes out to Dion for another great trade and for sending this securely and even in a toploader. I look forward to our next one!
at July 18, 2019