The Origins Of A Cardboard Addict: Halloween

I watched a ton of Halloween movies growing up. My mother would rent 7 movies (VHS tapes because that's how we rolled) for $7 for 7 days. It was a great deal and gave us plenty of entertainment for a week.

So my mother would fly over on a broom to the Horror Movie section and pick out a bunch of different films. From Night Of The Living Dead to Childs Play to Halloween to Friday The 13th to Killer Nerd to IT to well, all. We watched every VHS tape in that store. I can't remember all of the  names as some of them were the cheap flick films, but would remember the films once they start playing today.

And when I say growing up watching these, I was roughly 6 when she put those movies on for me to watch with her. It was my Sesame Street I suppose.

Despite my age, I wasn't ever scared of the films. I actually grew to liking them and wrote stories and acted as some of the characters with my friends. No, not in a "I am going to kill you" way. Growing up when I did, you could watch any type of movie and play any type of video game and not act it out. We weren't idiots. We also didn't have YouTube to be idiots on for "hits".

Enough with me ranting on today's generation, I could go on and on by the way, let's go back to the Origin story.

Growing up my favorite holiday was obviously Halloween. Candy and dressing up as some of my favorite characters, awesome.

We had some great masks back then. Some were crispy plastic while others had this odd candy corn scent to them and were made out of rubber. My parents were always cost efficient when it came to picking out a mask, so every year, I got to wear the iconic hockey mask of Jason Vorhees. You know the hockey mask wearing, knife wielding killer from Friday The 13th. 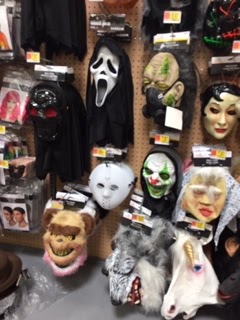 When I was at Walmart recently, I went to the mask section to snap a pic for this post and noticed how sad the masks have gotten since I needed to wear one.  There wasn't a lot of variety and most weren't even Halloween related characters. Isn't that what the holiday is all about?


But, seeing that Jason mask brought me back to those Trick Or Treating days. We would only go to a few houses of people my parents knew and one we didn't. More on that one in the next paragraph.. One of them I will always remember. It was an older husband and wife couple, she would always open up the door and serve the candy while her husband hid around the corner outside, played dead on the porch or was there to scare you in some other way. He got me a few times. One year he scared my sister so bad she wouldn't ever go back on that porch. She sat in the car and made me request the candy for her. It was funny for me, but scarring for her.

Another house we would always hit up, even though my parents didn't know them, was known as the "money house." They would give you huge handfuls of  change and full size candy bars. If that wasn't money I don't know what is. The only thing that could have been better would have been if they handed me some sports cards. Which I never once came across.

I don't remember the age I quit Trick Or Treating but pretty sure it was long before I was a teenager. It seems today's generation has changed the way you do Halloween. Many don't even go house to house anymore, my wife and I gave out candy for five years and had a total of five kids in those years. Many do this Trunk Or Treat thing when you decorate your trunks and have candy out of the back of them while setting up at a park with many other families. Doesn't seem the same to me. While many others do Harvest Parties or get together not based on Halloween. Or the parents just buy the kids candy and stay home.

It may also depend on the area you live in as some of you may notice things differently. This is just my perspective from where I am.

Every year I think about handing out candy again and adding in some card treats, but after many years of no kids coming I figure it would be a waste of time.

As for my Halloween now, even I have changed. I no longer watch scary movies since I got with my wife. I do watch some Halloween movies but we will see those tomorrow's post. I also don't write horror either anymore despite having a book long word document that I almost sent to presses I did years ago. It still sits on a pin drive. However, the one thing I do still enjoy is my candy. Every year we buy a big bag of chocolate and I also snag a bag of candy corn. Not everyone's favorite, but I do enjoy a little.

As for my mom, she still watches horror and gore. I didn't expect that to change ever. My sister watches it with her now instead of me.

Where I live now is not very far from where I grew up and Trick Or Treated. Sometimes I am very tempted to test fate and see if that guy still hides on his porch on Halloween or if he has moved on or passed on. It would be more scary knowing he has passed and still on the porch.....
at October 30, 2019

Email ThisBlogThis!Share to TwitterShare to FacebookShare to Pinterest
Labels: 2019, Halloween, Halloween Dress up, The Origins Of A Cardboard Addict