The Origins Of A Cardboard Addict:The Great Pumpkin!

My mom celebrated Halloween in the 90's like it was her birthday, and sometimes when I was younger I could see that. She could be a witch some days.

Then there was the non stop horror movies we watched together even when I was 8 and under like it was Sesame Street. We watched Halloween, Friday The 13th, Child's Play, The Howling, Killer Nerd, Children Of The Corn, all Stephen King, and many, many others.

I was writing horror stories of my own in 3rd grade using characters from the movies in my stories in which I am sure worried some teachers. But, here I am today. Not wielding a machete like Jason. Even though I watched stuff on TV, I wasn't stupid like some kids are today to try it out. It's amazing the stuff people will do to get a few hits on YouTube.

Anyways, there was one thing that didn't involve killing that we would also watch every Halloween. That, well, It's The Great Pumpkin Charlie Brown. 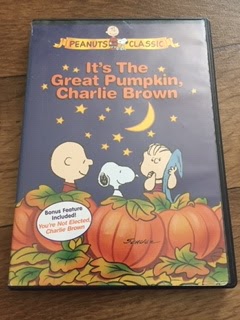 And unlike today where I have the DVD of it, I had to wait til CBS put it on TV to watch. You had to keep track of the TV Guide to make sure you weren't going to miss it and even put it on your calendar.

The story involves Linus who believes in The Great Pumpkin, that is believed to be a Santa type character that brings toys to the children who believe. So every year he sits in the Pumpkin patch believing that it will be the year The Great Pumpkins arrives....but doesn't. He never gives up though and will continue yearly to do so. I think at this point it’s just to prove his friends wrong.

All of his friends don't believe him and go out on their own Trick Or Treating instead of waiting in a pumpkin patch all night. i will say however, my favorite part of the special is watching Charlie Brown continuously getting a rock at each house. I crack up every time I hear him say, “I got a rock.” While the other kids of course get candy.

This is one of two specials every year I try to continue on tradition to watch. The other, Garfield Halloween. Absolutely love that one and can pretty much quote it on que.

I no longer watch the special with my mom as we aren’t as close now, getting older and moving out will do that, but I still wonder if she watches it.

Either way, I won't stop.

How about you guys? Do you remember watching these on TV? Do you still view them now?
at October 31, 2019

Email ThisBlogThis!Share to TwitterShare to FacebookShare to Pinterest
Labels: 2019, Charlie Brown, The Great Pumpkin, The Origins Of A Cardboard Addict