Comin' In Hot: Don't Judge Me

I kept seeing more great card after card that @JHawksHoops was posting and decided to try and do another trade since our first one went so well. Which this one did to expect I didn't quite get the card I wanted the most because it had been traded just before I inquired.

I did however finally settle on a card I would take in this trade for a PC I partially gave up on awhile ago. We will get to that in a second. First , let's check out my newest Darius Slayton add from this trade, 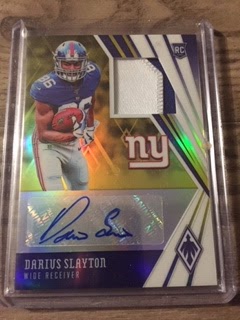 The Panini Phoenix autographs look solid. Just think they would be a tad better without sticker autos.

Now, onto the main piece. A new Aaron Judge autograph. I gave up collecting Judge last year after losing interest and putting my focus mainly on 90's cards and non sport again. I traded off three-quarters of my Judge PC but did hold the two autographs I had and now will add this one to it. I have yet to acquire a Judge autograph from Topps. I have two from Panini and one from Leaf. 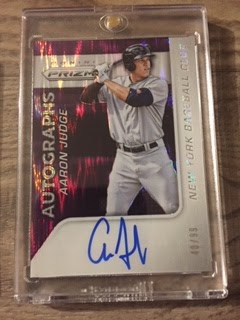 This one by far is my favorite of the group. Prizm autographs are very appealing on the eyes despite Judge's poor autograph.

Thanks again to @JHawksHoops for the trade. Hopefully I can get some more trade bait that you would be interested in so we can do this again!
at November 12, 2019