Dear Eli Manning,
Thank you. Thanks for 16 years of being the face of the NY Giants franchise. Thank you for two amazing Super Bowl wins over the hated Patriots. Thank you for your leadership.  Thank you also for that final memorable win vs Miami, a moment that Big Blue fans won't soon forget.

I hope you know how much you meant to me and other Giants fans. Through the good and the bad, we bELIeved in you. Thank you for making me be proud to be a NY Giants fan.

Your biggest fan and friend,
Matt

It was another difficult season for the Giants who finished 4-12, even though the record is better than they played, as they had a lot of young players including a new QB in Daniel Jones who stepped in for the 16 year veteran Eli Manning.

It was a moment I knew and could tell the last few years was coming, I wasn't quite ready to let go of Eli, yet. But, I knew it was time with the team struggles including Eli's the last few years. It was time to turn the page on what was an incredible chapter of the Book Of Eli.

Manning was drafted 1st overall in the 2004 NFL Draft and traded for Philip Rivers, and other draft picks, who was drafted 4th overall by the Giants

Looking back on this trade, I would take this trade again any day. Yes, Rivers has been a solid QB with better numbers than Eli most years and yes Kaeding was a decent kicker and I know that Merriman was a beast LB, but how many rings combined do they have.....wait for it....0. BIG FAT ZERO.

To me Super Bowl wins matter more than stats and it should. Eli has won two and was MVP for both. Giants couldn't have done it without him despite what some critics may say about the Giants defense winning it for them. Yes, they defense played a role, but who escaped the clutches of the Patriots in Super Bowl 42 to throw the helmet catch by to David Tyree that kept that game alive and who threw a sidelines dart to Mario Manningham to keep the drive going in Super Bowl 46? Well, it wasn't the defense that's for sure.

When it comes to my card collection, under my NY Giants PC Breakdown, you would have spotted Eli as my second biggest NY Giants PC to  with 586 total cards vs Rodney Hampton who has close to 700. I have a lot of mad respect for Eli as I have put in this post.

After Eli's last start at home as a NY Giant vs the Miami Dolphins, I decided it was time to add a couple of really nice Eli Manning cards to finish out the season.

One of those cards I have wanted since 2004 and finally acquired thanks to a trade with @Alindz99, the 2004 Upper Deck rookie. 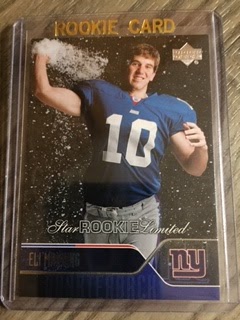 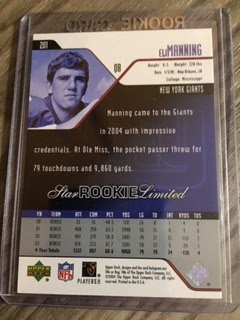 Then at Christmas time while searching for a Eli/Danny Dimes dual auto which was way out of my pocket, I came across this Passing the Torch auto and watched it. The next day, the seller offered a discount, I got an eBay gift card from my sister in law which ate it up and with a few other extra funds from my $25 a week leftovers, I was able to bring it home. 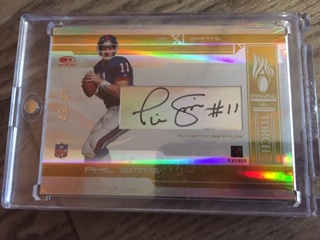 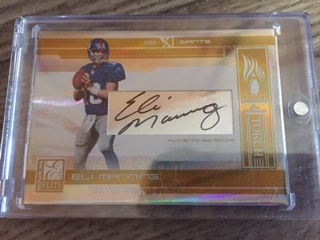 Mind blown. By far the best Eli Manning card I own. Even best Phil Simms card I own.  I was just surprised how cheap it was listed for.

I am not sure what's next for Eli Manning. I assume his future with football on the field is done but will he follow suit with his two brothers and do some kind of pregame shows or commercials? Time will tell. For now, he will just reign as the King Of New York and I hope he will always be treated like one.
Thanks again for everything Eli.
at January 07, 2020