I am an old fashioned guy. I believe those who work hard, should earn things. Nothing in life comes easy, there are no participation trophies and there is winners and losers. There is no black/white or in-between no matter the age or sport.

If there wasn't a winner or loser and everyone got the same trophy, then why bother playing? Yes, you can still play for fun, but what does that show you? Not to try your hardest? Don't give it your all? Can you imagine baseball or football and both teams get a Championship trophy in the World Series and Super Bowl...yeah...my thoughts exactly. I feel you work hard at something you can achieve it. You didn't win the top prize, go practice and make yourself better to earn it. You should never expect things and never should be handed things for free. Work harder and do your best.

Which is what I did for this years 2nd Annual The Rose Bowl Contest hosted by Stadium Fantasium blog.Yes, it's not always sports you can be competitive in. you can be in other things as well. Last year I just tossed some numbers out to the wind in hopes I would win, but, the fact I didn't put any thought and effort into my entry I wasn't even close.

This year I strived to do better and guess what, I won a prize. It was only the bronze level which is third place, but its further than I was last year and I got to take home a prize because of my efforts. 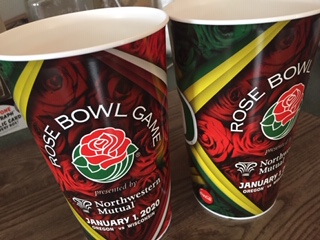 Then after that it was a rotating winner claim prize depending on where you finished. There was lots of great prizes up for grabs, a few I really wanted but my turn wasn't at that point yet, so I claimed what I wanted from what was left. 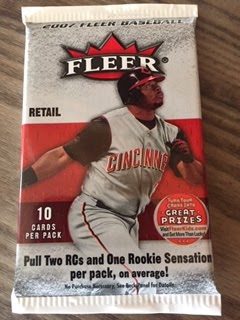 Including this 2007 Fleer retail baseball pack. Anytime I can open anything Fleer, I will take it. 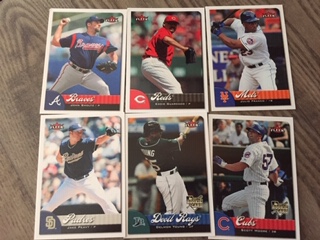 Delmon Young rookie. Can you imagine how hot that card was at the time? 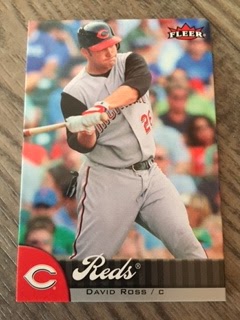 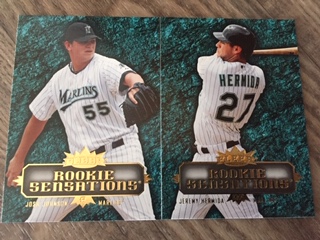 The two promised Rookie Sensations inserts, Josh Beckett and Jeremy Hermida who I had some nice cards of and I had always hoped he would turn out big. But, he didn't. 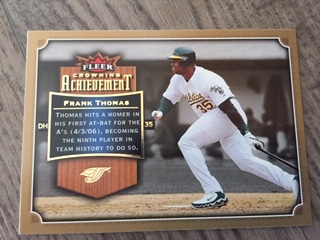 And then a bonus surprise, Crowning Achievement Frank Thomas insert. I will never get used to see him in any uniform that's not the White Sox. 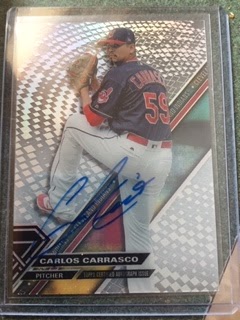 And the final prize was this Carlos Carrasco autograph on card from Topps Tek. I always like the Tek design but always worry that the autographs will fade over time like with those Pinnacle Inscriptions from the 90's,.

A solid prize for finishing third if I may say so myself.

Next year if this is hosted I will strive for an even better finish, except I would have to find a way to outdo the two-time champion Fuji. But, I am coming for ya haha.

Thanks for the prize Stadium Fantasium!
at March 17, 2020