Getting Me Ready For Free Agency

'Nor does my collecting of it. I don't switch sports in my brain ever. Football is always on top no matter what time of year it is and it feels like the season never ends whether its on cardboard or just in general.

After the Super Bowl, there is Franchise Tags, releases, NFL Draft Combine (since I don't watch any college football this is where I get to check out the rookies), and then Free Agency, The Draft, OTA's, Training Camp, Preseason, then the season. There really is not downtime which is great.

Nothing gets me more excited than free agency and this year the Giants have loaded pockets and there are some great free agents to grab.

My dream scenario is the Giants landing, Jadeveon Clowney or Yannick Ngakoue, Byron Jones, Justin Simmons and some free agent OT. Anything is an upgrade. Not sure who they have their eyes on, but we have many holes to fill before the draft so let's fill 'em!

Getting me more pumped for the Free Agency that is only a few days away, is getting mail days with Giants in them. I received a few recently but one by Fuji from The Chronicles Of Fuji caught me by surprise as I wasn't expecting it.

So I set his mail day aside while I opened up others first. Surprises are the best mail days so I always save them for last. 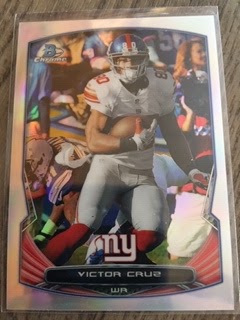 There was a great variety of cards in the package. A Victor Cruz Bowman Chrome refractor which looks as sharp as a knife up close. I wished Topps was still in the football game. 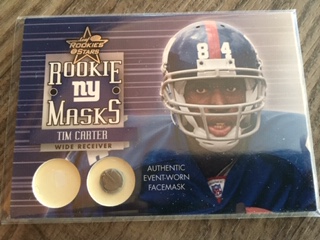 A Rookie Facemasks that caught my eye seeing one of the Facemasks was missing. Still a great card regardless and in the PC. 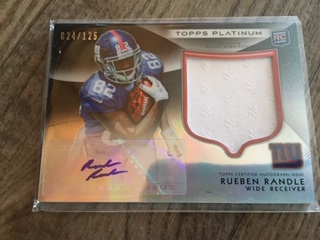 New addition to the Rueben Randle PC. His autograph is so, so awful but I still enjoying cards of him. 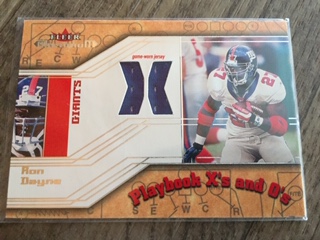 Ron Dayne. I like it when companies get creative with the jersey card placement when it's not just a simple square. There was this one from Fleer and then 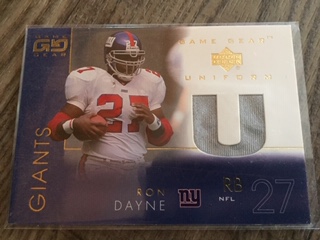 This Dayne from Upper Deck 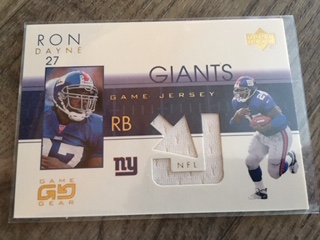 and finally this one from Upper Deck. Come on Panini pay attention! 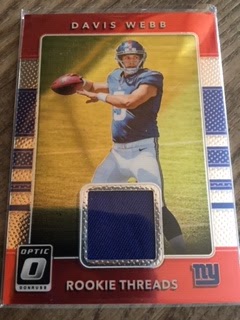 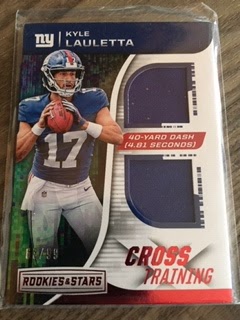 Kyle Lauletta I loaded up on. I thought either guy was the next QB for the Giants and I was ready for them to take flight. I didn't want to pay outrageous prices when they became the starting QB in NY. Well, neither survived the cut and now play elsewhere. But, once a Giant, always a Giant. 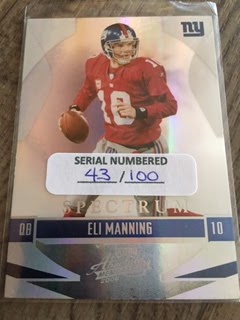 One Giant who rises above the rest for me, sorry Rodney you take second, is Eli Manning. I will take any and all Eli Mannings. My Eli is PC has surpassed the 600 mark but with thousands of Eli's to chase, I still have plenty of wiggle room to add. I prefer to trade for numbered, relic or autograph stuff as base I have to pick up on my own as a lot of it could be dupes.  Fuji grabbed a great one here. 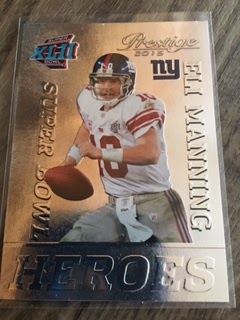 And then this Super Bowl Heroes insert from Super Bowl 42. Everyone who reads this blog knows how much I enjoy collecting any Super Bowl 42 and 46 cards.

Thanks to Fuji for the great surprise. I have a few things that have been set aside for you for awhile now I should probably finally get out along with some other bloggers I need to hit up as well.
at March 16, 2020