Growing up in the 90's, I got the privilege to watch some of the greatest athletes all time. YES ALL TIME. There won't ever be another Barry Sanders, Emmitt Smith, John Elway, Brett Favre, Michael Jordan, Wayne Gretzky, Tiger Woods, and so,so many others including the guy today, Jerry Rice.

Jerry was a baller.

Rice was selected to the Pro Bowl 13 times,named All-Pro 12 times, won three Super Bowls with the 49ers and an AFC Championship with the Oakland Raiders.He also holds close to 100 NFL records. You read that right, 100.

Name any WR from today that will even touch that and I will tell you they won't. Jerry was out of this world and it didn't matter which team or which QB was throwing to him. He did his job and did very well obviously.

The one team I will always associate him with is obviously San Fran. I still have a hard time seeing him in a Raiders uniform or even that one weird year as a Seahawk.

I recently entered a contest from @Showtime43CC on Twitter who was giving away a graded 8.5 2018 Flawless Jerry Rice Flawless Sapphire relic card. This card would hit two PC's if I won it. One, my 90's player sub PC and two, unique relic PC. So I entered the easy contest and hoped for the best. 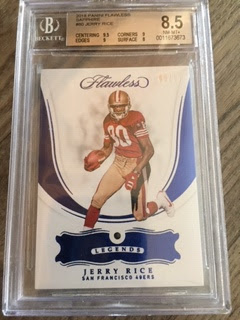 Here's the winning card.  I always wonder if these jewels are authentic but I am going to treat it as such. 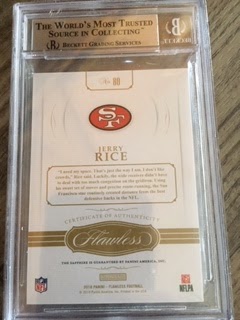 Thanks to @Showtime43CC for the mail day.

Because of this win, I had to go and Google some YouTube videos of big Jerry plays to take me back. I suggest you do the same.
at March 12, 2020