Johnny's Now Trading With Me

A few weeks ago I put up a post looking to do more blogging trades and welcome in some new blogging traders. That post actually surprised me when I had two new guys throw their names into the hat for a trade. One of those trades I am still working on but the other was done the next day with Johnny's Trading Spot.

I have always read his blog but guess didn't correlate the fact he has a blog with the word trading in it and actually trading with him. (smack my head emoji)

But, we got quick one done and his envelope showed up way faster than I had a chance to get mine out. I once again had to grab some extra stamps on hand to make sure I could cover a few more trades which I plan to do soon. I used a few of those stamps for RAK's.

I had no idea what Johnny was sending me in our very first trade as we didn't get to the details, which I am fine with as surprises are the best way to do trades.

And boy was I surprised.

All six cards in the PWE had been signed, not at all what I was expecting. 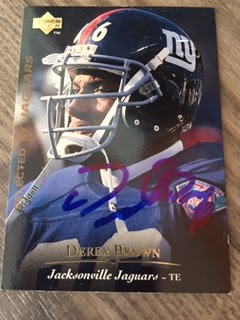 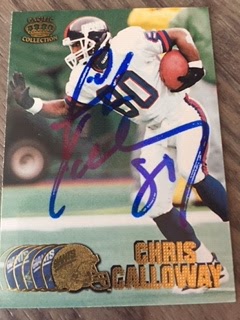 Chris Calloway, I always liked him. Never quite stood out as a super star but made some great plays. 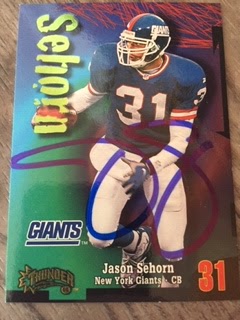 Jason Sehorn I always had mixed feelings on. One game he is a shut down corner, next, well he was the leagues worst. Either way, I have more good memories of Jason than bad so I am more than happy to take on his autograph. Didn't have one before this. 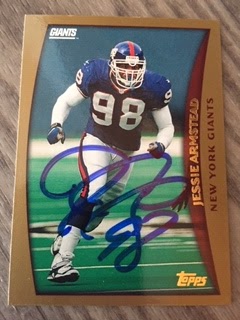 The biggest memory I have of Jessie Armstead, who was a heck of a player by the way, was his interception in Super Bowl 35 that got brought for a touchdown. A touchdown that could have changed the direction of that game. But, instead a holding penalty called it back and the game wasn't ever close after that. 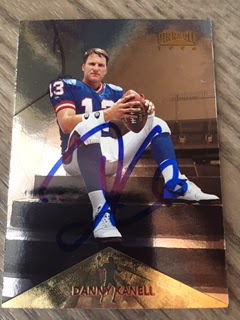 Danny Kanell started some games for the Giants, wasn't the answer after Dave Brown but held the seat warm til the Giants brought in.... 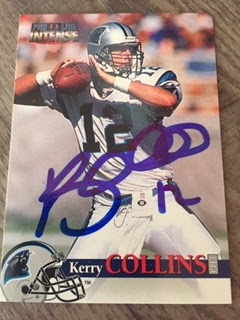 Oh look, Kerry Collins. There is just something so appealing to his signature. He is always one that seemed to sign his jersey number whether it was 12 or 5. It was always there. This will be a great piece for my Collins PC.

Thanks to Johnny for the first time trade and hope we have more to come. I am kinda curious to say the least where you acquired these from. TTM? In-person? bought? I always enjoy a good backstory with my cardboard.

As most readers know, I really liked watching Mark play especially his time with the Jags who were my second favorite team in the 90's. 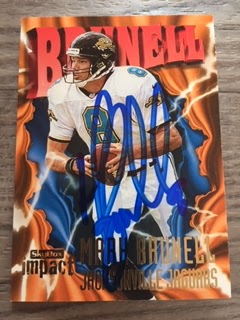 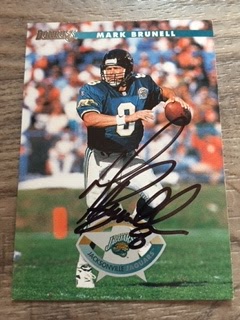 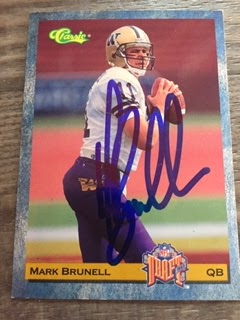 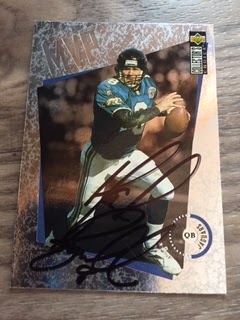 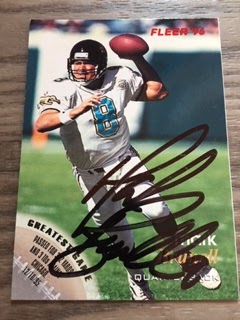 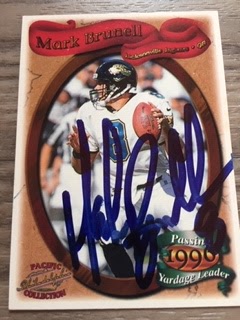