As 90's sports cards got competitive with multiple companies around, it drove them to be more creative and think outside the box.

Which is why the 90's were the best decade of card collecting and always will be. Especially from 1995-1999, where a lot of my collecting focus is.

And when it comes to adding new cards for Kerry Collins or Rodney Hampton, that's where a lot of my focus goes for sure.

My latest addition to the Kerry Collins family hails from 1997 and the Collectors Edge product, Excalibur. 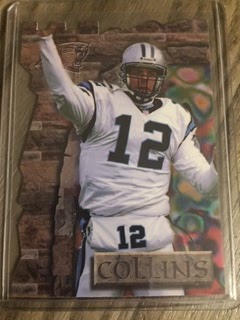 Castles was a 25 card retail insert that fell 1:20 packs. It's die cut shaped like a, well, castle. It's also supposedly a parallel to the Overlords insert found in hobby despite the two not looking the same at least on the front of the card. 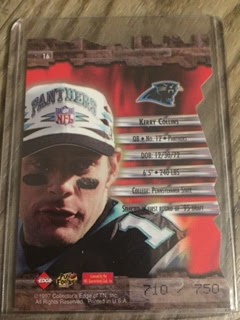 The backs were the same for Overlords. The Castles inserts were numbered to 250 and probably not the easiest finds despite the short odds. I find any insert numbered in the late 90's is not an easy chase.

I think I won the auction for this Kerry for a few measly bucks which I will take especially since I haven't seen another of it's kind out there.