All of my Kerry Collins additions have to be interesting ones to start off. I will do all I can to save the base for last.

I like refractors, jersey cards, autographs, cool looking cards and numbered ones especially. Numbered cards in the era that Collins was on cardboard was an era where they actually mattered. Especially the lower numbered ones. You really need to make sure you chase those as you may never see them again. I sadly just lost out on one /30 from 1998 Contenders Leather football. I forgot to toss in a bid and it went cheap unlike the two others listed on eBay for $50 OBO. I refuse to pay that, well, I don't have that to pay.

Today's pickup is a numbered parallel that I hadn't ever heard of before. Of course it came out in the hobby around the time I had stepped away,  but I also hadn't seen many listed either. 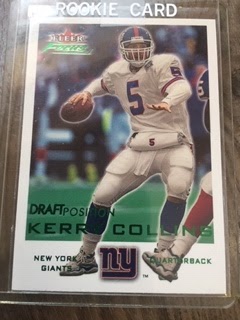 These Hobby Exclusive cards have the Draft Position wording on the front along with a minor blue foil change to the name and the word focus. 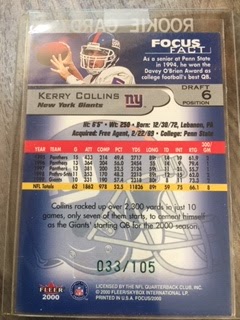 The parallel is numbered to 100 but also is numbered to what ever the players Draft Position was. Kerry Collins was the fifth pick of the 1995 draft so you take the number 100 and add a 5 to it. So his card is numbered to 105. Other players are different depending on their draft position.

Not the most exciting parallel in the world, but for a few bucks and the fact it's from the early 2000's, it's a worthy pickup.