The final post for my 90's Topps Chrome chase is one I have been knocking down big rookie cards of. I have so far landed Jake Plummer, Warrick Dunn but still need Tony Gonzalez and his awesome dunking job over the goal posts.

Once again, it's another set with only 165 cards in it and feels like a chase. Which I don't mind.

Back in 1997, I actually had completed the set and held onto it for a couple of years before moving out of my parents house where my father eventually sold it.

So here I am 23 years later chasing down what I once had. 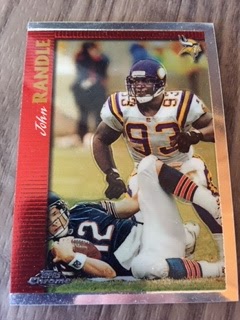 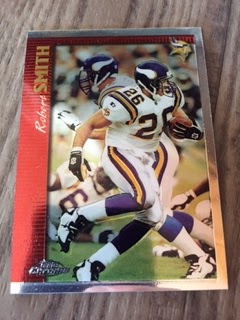 It's not too far, I need to also see if this is completely updated as well. But, it's a start and I have a couple of the key ones knocked down so that's an important part.

That's it for sets today. If you like what you see, maybe you should try to have some sets yourself. It's starts out slow then really builds up as you go!
at March 21, 2020