RJ's Cardboard:Catching Up On Many Part 1

Hey guys!
Sorry for another week without $25 A Week Challenge and next week will be the same. I hope to bring it back the following week. For once in my hobby lifetime, I have had a focus on my collecting and been knocking important things down that I am actually collecting and not going off the beaten path. Hence, the delay in that segment.

For some reason or another my focus has been on RJ Barrett instead. Like I said, I caught some weird strain of the Panini Virus and have no reason to have.

I haven't collected basketball cards, other than 90's ones, in many, many years but I am hooked on trading/grabbing cards of RJ.

I can't narrow down my reasons for collecting him out of nowhere other than he played for Duke and now plays for the Knicks who drafted him third overall in the 2019 NBA Draft. Both teams I no longer watch,but still root on. Of course you can't ever find a Knicks game on TV to begin with anymore. But, if they did, I would probably actually watch them just to watch RJ play. The Knicks haven't been the same team or organization I used to watch. They are a complete mess.

RJ started out the basketball season hot but then had an ankle injury and was out for a little while. Which in the hobby translates to him being under-the-radar now especially with guys like Zion and Morant being the hobby driven leaders for basketball cards this year. Of course Coby White has also come on strong as of recent to.

So far Barrett in the NBA has averaged 14.3 (as of typing this) points per game. Which isn't shabby by any means and has shown higher numbers in a few of those games. Yeah, I am a stat checker instead of game watcher.

My Barrett PC came out of nowhere and now I have close to 40 cards overall. Not even sure how that happened. But, here is a first glance gallery at some of them. Part 2 of this has my better ones in it. I will say though ahead of time I don't have a rookie autograph, still looking to trade for one.

Here is Part 1 of my collection so far, 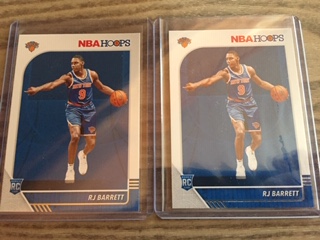 2 NBA Hoops rookies. My first one came from @CardpocalypseNC 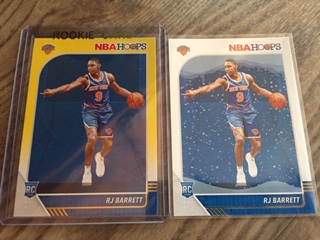 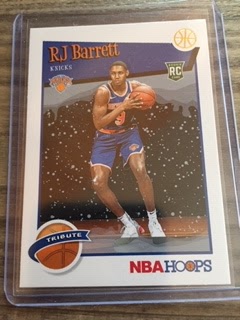 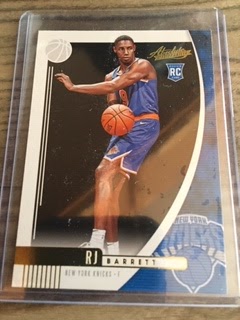 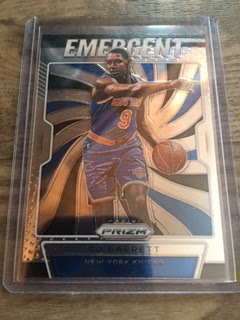 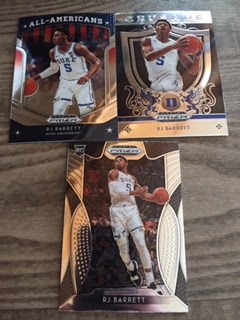 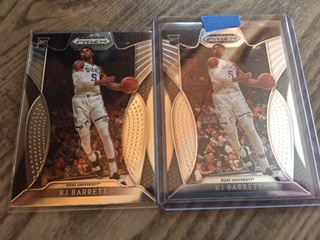 More of those. This product gets no respect to it's much popular older brother product in NBA Prizm. But, same goes for football as well. 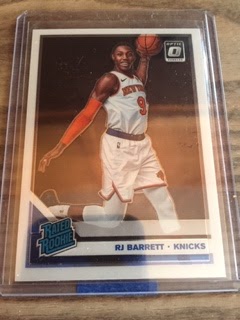 And his Optic rookie. This is the only Optic card I own as I posted before, there was no Optic here.

That's it for gallery numero-uno.

I will have plenty more to show in weeks to come along with a big gallery again next week with my favorites so far. I am not sure if RJ's Cardboard will become a series regular on here or not, we will see.

Thanks for checking it out and have a great Saturday!
at March 21, 2020