Autograph Of The Week:Wilmer Valderrama

I have seen/heard Wilmer in a lot of TV over the years, but nothing compares to his role as Fez in That 70's Show. I watched it back in the 90's in my much younger years but didn't really appreciate it until I was an adult, especially now.

Every weekend on Laff, a television channel, they re-play all of the episodes so I get the chance at a good laugh which can be needed in today's trying times.

Also, Wilmer has been on one of my favorite shows the last few seasons in NCIS playing special agent Nick Torres. It took me a little while to like his character, but it has grown on me and now I am a fan.

For some reason or another while playing on eBay, a sponsored ad for an autograph card of his popped up. At first, I had no idea he had autograph and then I knew I had to have it.

After some back and forth with the seller, we finally came to a price agreement and I landed this one pretty affordable compared to others. 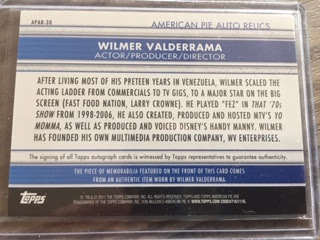 Card back with info about Wilmer.

By the way, I typed this up at the end of March so if this doesn't publish before the NCIS season finale, I don't know what could have happened to his character since NCIS is really good about hiding their plans for the finales.