Two Of The Best

I am not usually one for Leaf products, especially their sport ones, but I do really like their non sport ones such as Pop Century.

I have been collecting non sport stuff pretty hard over the past couple of years adding what I can when I can especially those that played a role in my life.

Today I feature two of my favorite actors who both played in a film together.

The movie, well, Caddyshack from 1980. The actors, Chevy Chase and Bill Murray.

I have always liked Chevy and all of his movies. Some are better than others, but all give me a chuckle. However, by far,  National Lampoons Christmas Vacation is his best and my Top favorite movie of all time OVER ALL OTHER MOVIES. I would watch it in non holiday times.

As for Bill, I liked some of his movies, not as many as Chevy, but my favorite roles of his is Ghostbusters, Space Jam and especially being the greens keeper in Caddyshack. I had to show my nephew Caddyshack just for Murray's character. It's just too bad he wasn't in the second movie which fell flat to the first in comparison. Though both movies had A+ stars in them. 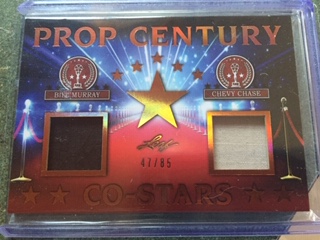 This Prop Century relic features both Chase and Murray. Not sure what the relics are from, but it's a cool piece to have. I already have a solid Chase PC and this is my first thing for Murray. I wished he had an autograph to chase.

The only thing negative I find about this card other than it not letting me know what the relics are from, is the fact it doesn't have their faces on the front with their swatches. Instead of that award symbol, put their faces above their names. That's all I ask. 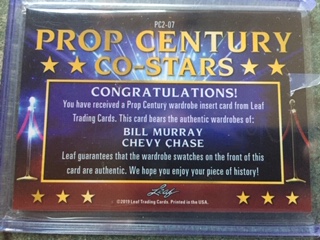 Back of the card has no specifics what the wardrobe cards are from other than being authentic. Would have been nice to find out which movie they are from.

I don't think this will be the end of my chase for Chase. I see he has other relic cards in that set with plenty of other stars.
at May 28, 2020