Autograph Of The Week:Mark Brunell

The autograph this week is a common one I have and been adding to all year.

However, this one is a really special one which makes it why it's being posted on Autograph Of The Week instead of being featured in a normal post.

This Mark Brunell I have been watching for over a year and the seller finally put it up for a cheap auction and I was the only bidder.

I had no idea the concept of helmet cards were used that early, well late, 90's. I always thought it was a 2000's idea but I have come to realize that more and more stuff from the 90's I didn't know existed. 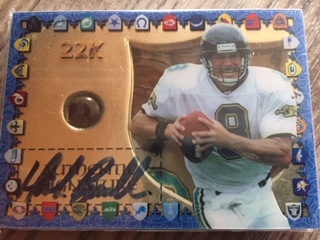 Also realized that this cards is a shadowbox (also note the on card auto). The card features a game used helmet swatch and has the 22K gold foil. 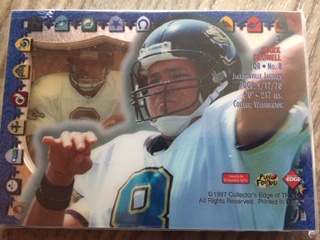 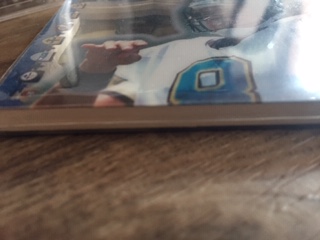 Side view of card and how thick it actually is, like a shadow box. You can also see the layers.

It's another great autograph, 90's PC add and Brunell side PC add.

The odds of pulling one of these was 1:350 packs so not an easy find. There are 5 others to collect. Wonder if I will chase more..... (really not sure as they don't look cheap and not all 6 are to be found) But being this thick I can only imagine if pack searchers existed in the 90's this would be an easy find.

Next week another new autograph, this time we head back to the world of non sports which is what this series is really about. I have three new ones incoming so will have to decide which one.
at June 27, 2020