At Least These Look Good 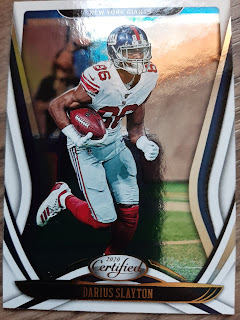 Football hasn't gone quite the way I had hoped this season.

I know the Giants had a rough road ahead with their tough schedule, but if you were to tell me they would be 0-5 yet again, I would have shunned you.

But, here we are and I have nobody to shun except myself for expecting so much out of this team.

My prediction for this years team had them pegged for a 8-8 or 9-7 season and it guiding them into the playoffs. With a newly rebuilt offensive line and defense fixed, I expected no less, but it has been even less then less with them currently sitting at the top spot for next years draft. Now there is a chance they could still win eight or nine games and pull off my prediction, but it's highly unlikely.

Their offense is one of the leagues worst. The line can't block, Jones isn't having time to throw and is turning the ball over because of it. 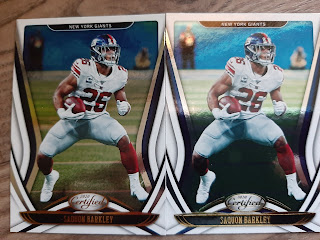 Oh, and they lost their best offensive player in Saquon Barkley for the season. That alone was a huge blow and set the pace for this season.
The defense hasn't been atrocious, but has still cost them some games when it matters most. They don't quite hit home yet on the pass rush though it's better than last year and the secondary is still iffy giving up big plays. They really need to find a corner to put alongside James Bradberry instead of week to week plug-ins. 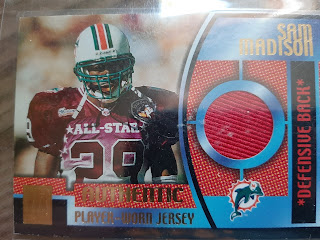 Too bad that Sam Madison wasn't still playing. They signed him back in 2006 and he made an instant impact for the team and helped them to a Super Bowl 42 win.
At least one high point this season is that I have had some nice mail days, with today's coming from @StephenJFurlong, that has kept my mind occupied while I suffer though each Sunday's game. Stephen had some duplicates of Giants from 2020 Panini Certified I didn't have so he told me he was sending those but the Sam Madison Pro Bowl swatch was a nice surprise.
The 0-5 Giants take on the 1-4 Washington (bites his tongue on calling them the wrong team name)  Football Team on Sunday in a matchup of two bad teams. Question is, which one is worse and can the Giants finally get that W? Guess I will find out this weekend.
at October 13, 2020

“Value the Customer, Respect the Hobby”
Click THIS LINK:
https://midwestboxbreaks.com/
to score the best break spots and bring home all of the cards y0u pay for! Including base!!