Part 4 of my trade from 90's Niche Football Card Blog takes again back to 1997 with another rare 90's insert......the PRECIOUS METAL GEMS!

These bad boys are numbered to150 and fell at a rate of 1:48. Despite how many packs of Metal I bought back in the 90's, I had zero success in pulling one. When you can't pull something you want, you resort to buying it. When searching to buy one, even the worse no-name players will run you $20 which I think is a lot but that shows the rarity on these. Especially finding them in great condition as most had chipping issues.

This one came in mint condition and was found at a bargain on eBay, so 90's Niche Football Card Blog had no problem picking it up for me as apart of our trade. No matter the player, I was happy to have it in hand, not that Moulds was a bad player either. It's just a nice looking card all around.

(you can't see it here, but there is a reflective shine that goes along with this card) 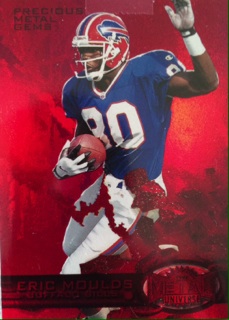 With this in-hand it tackles another card off my want list. Now I really want a green PMG so I guess you can say I took one off the list to only replace it. Only 15 out of the 150 made in the run were printed green, so I can only imagine what prices would be even for the worst players. Just finding one in general could be tough. But, just like my two biggest 90's additions, you just never know when or how I will pick one up.

Anyways, I gotta say a big thanks to 90's Niche Football Card Blog for helping me acquire this piece. Always feels great to knock one off the ole want list.
at August 20, 2015