It's not everyday I let my mind drift when I am die hard searching for something I really want, but when looking for Rodney Hampton's recently, I happened to come across a great deal for a QB's autograph I enjoyed watching back in the late 90's, Jake Plummer. Who some know as "Jake The Snake" Plummer. And yes he adapted the name from the wrestler who adapted the name from former Raiders QB Ken Stabler who was also nicknamed," The Snake."


The combination of the price, brand, the on-card appeal and player I couldn't say no. 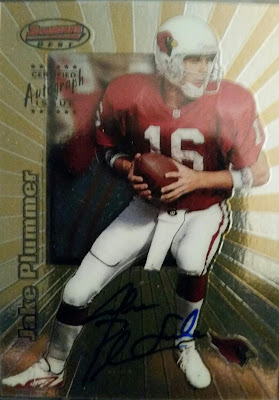 If you don't know Jake, he spent 10 years in the NFL.6 with the Arizona Cardinals and ended with 4 years in Denver. He was drafted by the Cardinals in the second round in 1997 and started only 9 games his rookie year going 3-6.

I best know him in his 1998 year, oddly the year this card is, where he took the Cardinals to the playoffs and beat Emmitt Smith and the Cowboys in a playoff game. Believe me, I cheered hard that day. Even though at that time Arizona was also an NFC East foe.

I feel pretty good about this purchase and glad I stumbled onto it.

Have you guys ever drifted away from your buying intentions and ended up with something else?
at January 29, 2016