FEATURED TOY:
Most of us who grew up in the 90's knew who Doug was. If not, here is a quick recap on the show that came out around the same time as classics Ren&Stimpy and Rugrats.

The show focuses on growing up with its title character, Doug Funnie, who had just moved into a new town and school in Bluffington. The show covered many topics of trying to fit in. Whether it was bullying to rumors to romance which was a big focus on the show with his classmate and main crush, Patti Mayonnaise.
Doug aired from August 11, 1991-January 2, 1994 On Nickelodeon before they decided to not continue on with it. It was then picked up by ABC that was bought by Disney and they played the new episodes on One Saturday Morning (man that theme is now in my head) from September 7, 1996-June 26, 1999. Luckily before the show ended, they were able to release theatrical feature-length film, Doug's 1st Movie which is what this toy is from.

I picked up this fine memory piece from a free box at a yard sale.The pen even still works and the toy is basically mint.

FEATURED CARDS:
Doug, even though the main character, seemed to always be under the radar when it came to character placement. I guess that's what you get when you move to a new town and learn life lessons of growing up.

I thought I would choose a few players cards from the 90's that I always thought were great, but never seemed to get the spotlight.

John Stockton seemed to always have Karl Malone over his shoulder "delivering". Even though John was always dishing it around and especially to Karl. Allan Houston was always under the radar for the Knicks, even though he made a key shot many times. But, when you have Patrick Ewing.... 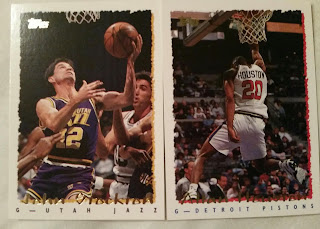 Chris Warren and Cris Carter were both BEASTS for their respective teams. But, it always seemed like when it came to the hobby or in popularity contests, they would never finish at the top. 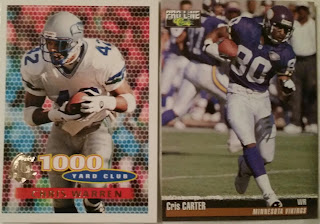 Same could always be said for McGriff. He was a truly seasoned veteran that played for many teams but never truly stood out despite how well the "Crime Dog" played. Edgar was teammates with Ken Griffey Jr, Randy Johnson and Alex Rodriguez. That alone should be enough said, even though this guy could truly hit with the best. 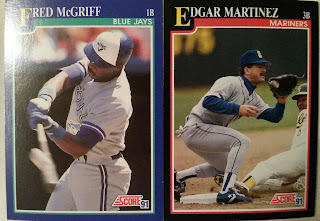 So who do you guys have as your player(s) that were great but always felt like they were in the "shadows" of others?

(By the way, after this episode, we are going on a complete Ghostbusters streak to get ready for the new movie!)
at April 07, 2016