Prisms not to be confused with Panini Prizm, were some of the coolest looking cards on the market in the early to mid 90's. They had borderless fronts (you know I dig that) with a color player photo cut out and impressed on a prism-patterned background. The blend looks great and I tried my best to capture the appeal.

Production was a bit down on these as supposedly on 16,000 of each card was produced in silver foil like the Hampton below and 1,138 of each of the gold parallel were made. I featured the gold parallel of Hampton in a previous feature.

With only one card per pack, it wasn't always easy finding your favorites which drove up Marshall Faulk's gold parallel rookie card in value as they were very hard to find.

However, luckily for me, Jammin JDcards helped me bring this Hampton home for the PC. 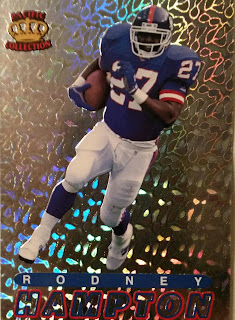 The back is the actual photo they cut the player out of to put on the front with a blurred background. 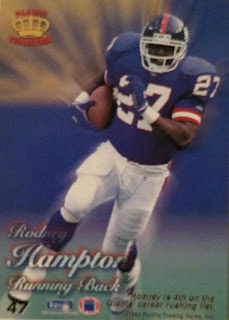 If you would like to help out the Rodney Hampton Cardboard Craze and have some unneeded Rodney Hampton cards that are collecting dust, check out my major want list right HERE and support the cause.
What are your thoughts on 1994 Pacific Prism?
at April 17, 2016